I’ve always hated the conditional tense, particularly the past conditional: would have, could have, and should have are such sad conjugations. And I find as I get older than I like them less and less.

I was mentioning to a colleague today that I’d decided to go up to Milano next Wednesday to catch the last performance of the Robert Carsen production of Britten’s A Midsummer Night’s Dream at La Scala. She casually asked how long I planned on staying – with that slight raised eyebrow that most Southerners give you when you mention spending any time in Milano. When I said just overnight, she gave me an astounded look and said: All that way for one night? You’re mad you know?

And I guess in a way I am. So far I’ve journeyed up to Milano, Bologna, Reggio Emilia, Parma, Torino and Genova for short periods of time to go to operas or theatre that I particularly wanted to see. But in discussing with Laurent– who often can’t accompany me because of work – whither I should go or not, his response has always been: Why not? 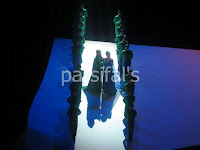 And why not indeed? If I don’t take advantage of the opportunities that are being presented I'm the only one losing. Probably in two years time it will be back to Canada, the winter cold of Ottawa and the mundane existence of a Civil Servant. La Scala, Salzburg, a box at the Opera and travel to the Dolomites, Greece and the Adriatic coast will all be in the past tense. And I would rather that not be past conditional.

And frankly I am getting too old to want to have regrets about not doing something. And not meaning to sound dramatic – Cecilia you know this is to set your mind at rest – but given the on-going health issues, more a matter of not being able to find the parts on E-bay than anything else, I should be making hay while the old sol is shining. 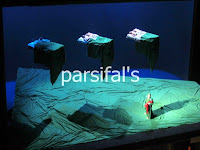 So next Wednesday I will board the 0930 AV for Milano, arrive 4 hours later, check into the Hotel Felice, meander around the neighbourhood, head down to Scala around 1800, get my ticket, grab a bite to eat in the Galleria and be sitting in my palcho at 2000 when Sir Andrew Davies mounts the podium. Next morning after a leisurely breakfast I’ll leave Milano Centrale at 1130. God and the deities of train travel willing I’ll be back in the house by 1600 – much lighter of wallet but a bit higher of heart.

These pictures are from the Carsen Dream when it was presented last year in Athens - my good friend Parsifal took them. For more a few more just click here. It is an incredibly beautiful production.

Make the most of it my friend, make the absolute most of it!!! I've always figured, if you can't have fun, don't go, you'll just screw it up for everyone else.

Ah, Milan- leather, cashmere, shoes... Oh and opera at La Scala, right sorry I got side tracked there.

Have a fabulous, fabulous time!!!!

PS- I will expect pictures of the pretty Prada bags so I can get all wistful and covetous.

Some of my most treasured memories are of art (in all its expressions) I've seen: Ian McKellen in Coriolanus; Yehudi Menuhin in concert; Patti Smith in concert when she was a hot young thing; and so many art exhibits! Some things have not met expectations, some have far exceeded them, but I don't regret any of them!

4 hr train ride is not bad at all. If I'm in your shoes, I'd do it. Heck, even if I'd fly from London and then return the next day. I'd do it, anything for opera!