My darling OC was right - Giovanni Paisiello is an absolute genius! And that was more than apparent on Monday morning's final concert at the Felsenreitschule. His Missa Defuctorum has a career almost as varied as that of its composer. It was originally written for a performance in memory of members of the Bourbon royal family who had died during the smallpox epidemic that devastated Napoli in 1789. Ten years later, for the funeral of the exiled Pope Pius VI, it was expanded to include new choral work and a Funeral March written at the request of Napoleon earlier that year. This unlikely history has led to it being referred to as "a unique mixture of obsequiousness to the Jacobines and homage to a Pope." It was this 1799 version that Riccardo Muti choose to end this year's Whitsun Festival. 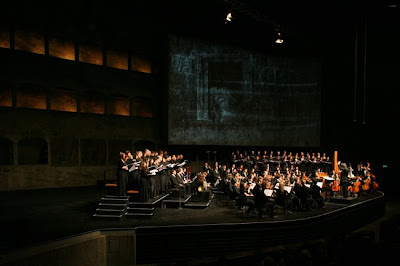 Riccardo Muti conducts the Orchestra Giovanile Luigi Cherubini, La Stagione Armonica and soloists in Paisiello's Missa Defunctorum.
It is a Mass in the grand style - Muti led four soloists, a double choir of 60 voices with choir soloists, two brass choirs and an expanded Orchestra Giovanile Luigi Cherubini. The sound in the Felsenreitschule was remarkable and placement gave the impression of the Mass being sung in a great cathedral.

Pride of performance has to go to La Stagione Armonica under Sergio Balestracci. This remarkable group of singers soared to the heavens one minute and sang in hushed wonder the next. The dynamics of their performance were exceptional as was the work of the soloists from within their ranks. The four major soloists - Beatriz Diaz, Anna Malavasi, Juan Francisco Gatell and Nahuel Di Pierro - made exciting work of the great Dies Irae sequentia. The center piece of the work, it is a remarkable piece of music. Less dramatic than many other settings it has a lyrical almost sorrowful approach to the Day of Wrath - it lacks the power of the great settings but still has considerable emotional depth.

Again this year from our vantage point we could observe Muti at close quarters. It sounds hackneyed but he seems to have an almost sorcerer's control over his performers. Not a movement is wasted - no dancing, bobbing and weaving - and with his left hand he seems almost to pluck the sounds of out the air. And his forces responded to every nuance and details he wanted from this work. As I said this is not one of the great settings of the Mass for the Dead but it is one that when it is directed with such authority and affection demands to be heard.

I have mentioned in all the previous reviews the audience response and this time I was able to capture some of it on video however have not been able to transfer it. So lets just say that the applause was prolonged and heartfelt.

Again, a brilliant conclusion to a festival that this year only seemed to get better with each passing day.

'It sounds hackneyed but he seems to have an almost sorcerer's control over his performers. Not a movement is wasted - no dancing, bobbing and weaving - and with his left hand he seems almost to pluck the sounds of out the air. And his forces responded to every nuance and details he wanted from this work'...
Now I can hear it in my head,and it sounds glorious!

i bet there isn't one jukebox in the entire town.

In the audio portal of Salzburg Festival site about Whitsun there is a very interesting interview in which Muti speaks in English for more than an hour. I wish it were in their video portal instead, but even so it is worth listening to him!
Thank you Willym for reporting your impressions from the performance.
Maria,
Athens.