There was a fascination with reflecting glass panels at this year's Pesaro Festival. There was a small variation on one in the Comte Ory and two very large mirrors filled the stage in Zelmira and La Scala di Seta. The mind boggles at the cost of this sort of stage craft in these cash strapped days but at least when the Festival does things they do them big. 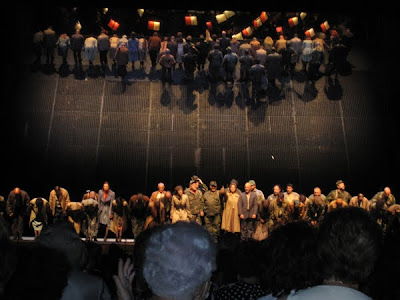 The chorus of the Teatro Comunale di Bologna takes their curtain call in front of the huge mirror that reflects the stage floor grid.
For the past three years the Festival has been showcasing Rossini's Naples works (2007- Otello, 2008 - Ermione) and Zelmira, written in 1822, was his last opera for San Carlo and despite a libretto that makes little or no sense was a great success. It soon appeared on major European stages and this year Pesaro presented the new critical editon by Helen Greenwal and Kathleen Kuzmick Hansell of Rossini's 1826 reworking for Paris. An aria added for Vienna in April 1822 was also included. This made for a long evening - Act 1 lasted 2 hours and Act 2 was almost as long. But musically it was time well spent.

Again let's get carping out of the way first: it appears director Giorgio Barberio Corsetti was booed on opening night and I can only think that it was a highly appropriate response not so much for his concept as how he saw it through. The curtain went up as soldiers in modern combat uniforms clambered over three broken statues covered in sand. Okay this was to be an updated production with flack jackets, women in 50s head scarves and priests in Orthodox clergy robes - no great hardship the story happens in Greece so why not?

For the next scene the stage floor slide open to reveal a metal grill and the sand tumbled through it - a very effect bit of stage magic - then the revealed statues ascended to the flies and hung over the singers' heads twisting and turning distractingly in the air. But not enough to distract us from Zelmira breast-feeding her father - showing that if Corsetti had not read the play Zelmira is based on, he had at least read the scholar's notes so thoughtfully included in the very fine programme book. The next scene brought that huge mirror which reflected the sandpit under the stage - a warren of tunnels with scurrying people in rags dragging bodies to and fro.

Aside from the fact that much of what was going on had little to do with the already obscure plot it was distracting from what was happening musically. And it did little to illuminate the characters or help the singers most of whom just stood around going through some pretty standard - pax the breast feeding episode - operatic gestures. By the end of the first act Corsetti had given up trying to titillate us and we had a standard backdrop, the chorus in a semi-circle and the soloists lined up in front of them (see photos above and left). The second act had a few surprises including some large screen live projections which required that blue screens be trundled on behind the singers. It gave us some powerful close ups of Aldrich and Knude in full throtle but was mostly a display of the wizardry of the technical crew and little else.

But ultimately with a work like Zelmira you are not there for the story or the stage craft but for the music. And on most levels the Festival did major honour to its eponymous composer with what was intended to be the year's showpiece.

Of course a great deal of the interest centred around the return to the scene of his first successes of tenor Juan Diego Florez (right as Ilo) in the role of Zelmira's husband. And he did not fail to deliver what was expected of him. His fans reacted accordingly with a lengthy - I was almost going to say "pro-longed" - ovation at the end of his Act 1 Cavatina. It was undoubtedly thrilling but the top is not quite as free as I have heard it on broadcasts or recording. Ilo is actually a secondary role and the rest of the evening he contributed to some fine duets, trios and ensembles. Where he was least convincing was an actor - not even the newly acquired goatee could convince us that he was the fearless warrior ready to do battle for his wife and country. His boyish good looks that work so well in so much of Rossini worked against him here and again the director gave him little help.

the usurper of the throne of Lesbos which is the principal tenor role. Written for the great Andrea Nozzari it is a fearsome piece of vocal writing but Kunde approached it fearlessly and with the required steel in his voice. It was not always a beautiful sound but it was thrilling. A few of the reports tried to foolishly compare the two tenors which is your old apples to apricots comparison or more accurately polished bronze to fired iron.

American mezzo Kate Aldrich (centre, right with Florez and Marianna Pizzolato) was making her Festival debut as the title character and dramatically she fit into the director's concept of Zelmira as the young wife thrown into a partisan's role against her will.

Though her singing was never less than beautiful I felt it lacked a certain weight that the role cried out for. She has a lovely mezzo voice more in the Von Stade tradition than the Horne and I kept feeling that a darker voice was needed - the part was written for Colbran and the Act 2 aria added in Paris for Pasta certainly if reports are to be believed voices heavier than Aldrich's. I found myself wishing that she and Marianna Pizzolato had switched roles. As Emma, Zelmira's confident and friend, she gave an object lesson in Rossini singing in her Act 2 (Vienna) aria and throughout the evening. Her's was the mostly consistently strong performance of the evening. Rather strangely Emma, who is so fundamental to the plot, is not included in the general reconciliation and rejoicing of the finale. That did not stop the audience from giving her a resounding ovation during the call.

Of the lower men's voices Alex Espisito handled the role of Zelmira's father well as did Mirco Palazzi as Antenore's evil advisor Leucippo. The chorus of the Teatro Comunale di Bologna processed as priests, bullied as storm troopers and cringed as village woman effectively. Roberto Abbado led the Bologna orchestra in a well-paced performance. Though I question if he needed to be elevated and spotlit to the degree that he was, given that this was a singers' opera. 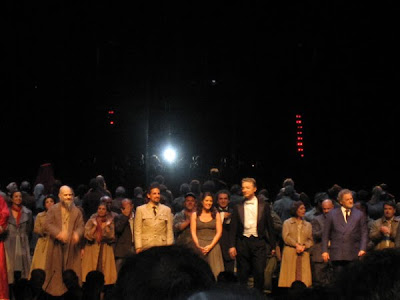 Conductor Roberto Abbado takes his bow with l. to r. Alex Esposito, Juan Diego Florez, Kate Aldrich and Gregory Kunde.
It was a long evening but worth it to hear a work so rarely performed - next year they have promised us an even rarer work from the Rossini canon - his 13th and many say unluckiest opera Sigismondo. It appeared first in Venice in 1827 and the disappeared from the stage until a revival in 1992. Francis Toye, in an early biography, said the work was "wholly, irretrievably dead and buried"; and in a later well regarded book Herbert Weinstock dismissed it in a few words. Given that many of the Rossini works we hear today were equally looked down on it should be interesting to hear.
Posted by Willym at 17:30

I love your Pesaro chronicles! I keep
reading them and always discover a detail about these rarely staged Rossini's opera. Thank you!