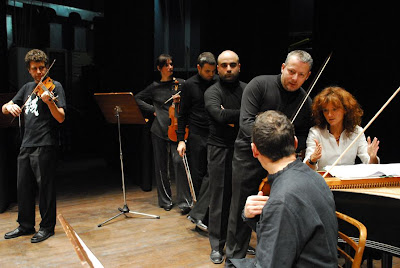 About half way through the 15 minute ovation that greeted this morning's performance of Nicola Fago's Faraone sommerso conductor Fabio Biondi (above rehearsing with Europa Galante), having acknowledged his quartet of soloists and the members of Europa Galante, turned to the still cheering audience and held up the score. It wasn't just us that you're cheering he was saying - it was this glorious piece of forgotten music. And that was the great difference between last evening's performance of Jommelli's Demofoonte and the Saturday matinee. To my ears, at least, Fago's oratorio was far superior to Jommelli's opera seria and gave the festival a much needed impetus. 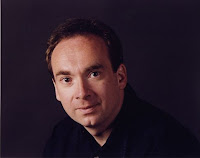 Though 60 odd years separate the two - as close as we can figure Faraone was written in 1709, Jommelli's 4th setting of Demofoonte in 1770 - their form is essentially the same. Oratorios were really only an attempt to get around the ban on operas during Lent - the action is moved along in recitative and then commented on in arias. Each part closes with a choral finale. The earlier work's libretto, by an unknown source, is the more concise of the two but still gives plenty of room for emotional outpourings and musical variety. And Fago - a composer of whom little is know - supplied an endless variety of music - menancing, contempletive and dramatic. 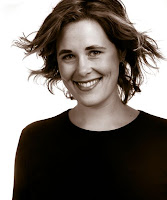 And there was more variety of voices - a soprano, contralto, tenor and bass assumed the roles of a Messenger, Aaron, Moses and Pharaoh respectively. And a remarkable quartet they were both vocally and dramatically. Though the performance was unstaged the four interacted with looks, gestures and reactions - and at the request of the performers we held our applause until the end which meant we erupted in wild, stomping applause at the conclusion of both parts.

Tenor James Gilchrist brought a clear ringing sound and some incredible colouratura to Moise's arias and his voice blended beautifully in duet with Marianne Beate Kielland's Aarone. Kielland had a sound that was at times almost that of a counter tenor, whither she did this intentionally I'm not sure but it gave extra depth to her character. Farone is perhaps the most interestingly of the roles and bass Havard Stensvold gave it a powerful reading filled with menace. With some of the most beautiful music in the oratorio Lucia Cirillo as the Messenger drew vivid musical pictures of God's wrath on Pharaoh and the people of Egypt as well as poignancy to her second act aria, though occasionally a touch of period singing "hoot" did creap in.

Biondi led the performance from the first violin desk and gave the score an affectionate if taut reading - it is a piece which he obviously loves. His group takes an obvious joy in playing this music and special praise should go to violist Stefano Marocchi, theorbo player Patxi Montero, harpsichordist Paola Poncet and organist Francesco Barone who supported the recitatives and many of the arias with elegance and virtuosity.

After the they had returned to the stage for the 8th or 9th time and in response to our stomping and clapping Biondi announced - rather delightfully beginning the sentence in Italian trying to continue in German and ending up in English - that they would encore the quartet that ended the first part. It was as delightful the second time and the cheering was renewed.

Damn this is what festival music is all about.

Photos above are from the Salzburg Festival website and are respectively Gilchrist, Kielland, Stensvold and Cirillo.

I can't believe the amount of blogging you're able to do - it's amazing!(You're faster with your reviews than the Citizen arts critic.)I'm loving reading about your trip but can't figure out how you find time to write them.

Seems the Saturday performance made up for any deficiencies of Friday. That's wonderful. Glad you're having a fab time.

Keep up those blogs.

You should be paid and recognized for these reviews!
DF