One of the great joys I've found since moving here is that I am seeing performers in person who I've read about, who's recordings I have listened to or who I've heard on broadcasts for years - Abbado, Pollini, Bartoli, Scholl and the list goes on. When I looked at the programme for this year's Festival I must admit I recognized quite a few names - Florez, Aldrich, Kunde - but one name did jump out: Claudio Scimone, listed as conductor for La Scala di Seta. When looking at the programme notes I was surprised to see that he had not appeared at Pesaro since 1985 when he conducted his own critical edition of Maomatto II. The absence of this well-respected and internationally known conductor and Rossini authority from the Pesaro podium is a mystery. But he was there this year and I had the privilege of seeing live someone who's recordings, particularly with I Solisti Veneti, I have listened to for years.

Written in 1812 La Scala is one of Rossini's five one-act farsi composed for the Teatro Giustiniani in Venice and one of five operas he wrote that year. It is a slight piece based on a slighter French play about a secretly married couple, an unwanted suitor, a meddling servant and the silken ladder used to enter the young lady's bedroom. Rossini wrote some charming music for it, the best known piece being the overture. 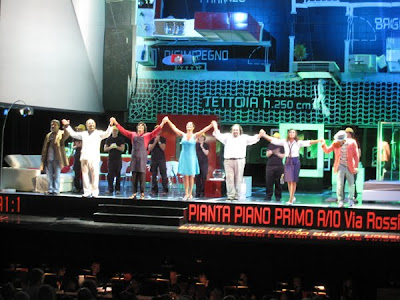 The cast take their bows in front of the reflected floor plan of a modern apartment which just happens to be the address of the theatre. Let's hope it doesn't give some developer ideas!
Director Damiano Micheletto updated the action to today with i-pods, track suits and espresso machines with little harm to the story.

Again we had a large mirror tilted to reflect the stage floor which showed the floor plan of a very nice modern flat on the first floor of Via Rossini 2 which just happens to be the address of the theatre we were sitting in. As the overture began stagehands began to drag furniture, plants, lamps and units (including a functioning kitchen sink) into place under the watchful eye of a real estate agent. As the action progressed singers mimed flattening themselves against walls to overhear conversations, opening doors or holding those same non-existent doors closed. The action was fast-paced, at times frenetic and had a bit of the a TV5 comedy touch to it. Though it did beg the question as to why a vibrant young lady who lived in her own very classy apartment, had a vaguely oriental houseboy and jogged in the Piazza Ducale with i-pod in place would need her guardians approval to get married or sneak her husband into the house.

Olga Peretyatko (right with Paolo Bordogna) was the young lady in question - and as well as giving a deft performance of the music she look pretty damned hot whither in jogging gear or smart casual. It was interesting that she was paired with Jose Manuel Zapata who did not quite fit into the opera singer as movie star mold which seems to be preferred amongst casting directors today. A short, stocky bear of a man with a sweet tenor voice I for one could understand the attraction. Carlo Lepore played the slightly greasy Latin lover with a fine comic flair and handled his interpolated aria with ease. Of the other female in the cast, Anna Malavasi, I will simply say that I did not find the slightly sour edge to her voice appealing.

The best performance of the evening came from Paolo Bordogna as the poor put upon house boy Gemano. In his ink-black mop wig, sandals and pajama-like outfit he was obviously meant to be the Oriental houseboy of so many 60-70s movies though in a slight nod to political correctness - and in deference to its many Japanese patrons - it was stereotype with soften edges. Bordogna delivered the most polished singing of the evening and a delightful comic performance. 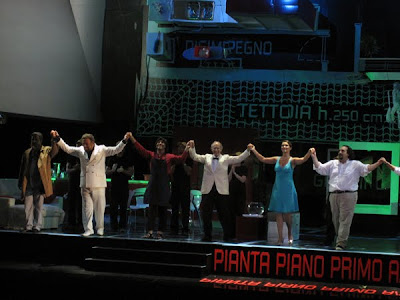 Conductor Claudio Scimone (centre) joins his young cast - Daniele Zanfardino, Carlo Lepore, Paolo Bordogna, Olga Peretyatko and José Manuel Zapata for a curtain call.
But the real star of the evening was Scimone in the pit leading the Orchestra Haydn di Bolzano e Trento. He conducted with a brio and joy that turned this, let's admit it, light-weight work into a delight. The obvious pleasure he took was reflected in his face and body language at the curtain calls. He was obviously pleased with the work of his young cast and orchestra and with the applause they were receiving. He was justified - under his expert guidance they had given us two hours* of enjoyment which was the whole raison-être of these pieces.

*Though Scala di Seta was written as an one act opera Pesaro performed it in two acts and include an aria for the Latin lover that Rossini had written for some other use. Artistic director Alberto Zedda explained that in 1812 the creator of the role had not had a particularly good voice so was denied an aria; here they had a fine singer who deserved a chance to show his stuff so another source was robbed to give him the opportunity. It was a very Rossini solution and I'm sure he would have approved.

Sidebar: I was sitting at the hotel pool one afternoon and an elderly gentleman and his wife came out to take a bit of the sun. The gentleman had a ulcer of some sort on his leg and was moving slowly, I helped him and his wife get settled in, moved lounge chairs etc. When they left we exchanged pleasantries and I kept thinking that I recognized him. It was not until he entered the pit the next evening that I realized it was Scimone.

I've looked on every juke box in town and not one of them folks is on them..

"one of the great joys I have found"
reading your Pesaro chronicles, is to share that mutual knowledge of singers I have also seen, Kate Aldrich, Cecilia...And all the ones you make me discover and perhaps see one day!