This is posted without comment except to say I hope my friend Jeff sees it and remembers our dinner conversations.


Thanks to Jenn for passing it on - and frankly I'm frightened that both of us probably know what most of those acronyms mean!

26 March - 1636: Utrecht University is founded in the Netherlands.

Her Words Say It All

My dear Elizabeth doesn't post to Love Elizabeth very much these days - but then given what has been going on in her life it is understandable that she has very little time for blogging. When she does it is not usual for her posts to stop me in my tracks and take my breath away.

I try to avoid family matters or speaking of things that, though close to me, are not mine to speak off but her entry is past week hits very close to home - hers and ours.  Sadly Laurent and the rest of the family have watched this happen over the past ten years in our family and can only share with Liz and her family the sorrow, the pain and the fear.  A right click on the remarkable photo will take you to a piece that has had me close to tears for several days now. 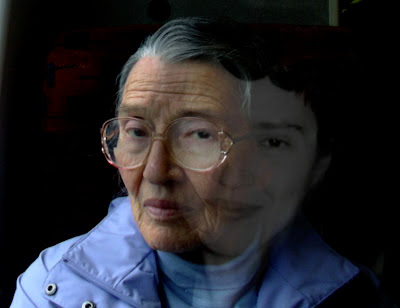 She has captured so much of what we are seeing and have seen and are afraid that we will see.

Having just renewed my subscription to the orchestral season 2012-2013 at the National Arts Centre - how's that for optimism???? - I thought maybe I'd share a few musical lunacies. Most of them passed on by my very musical friend Cathy. 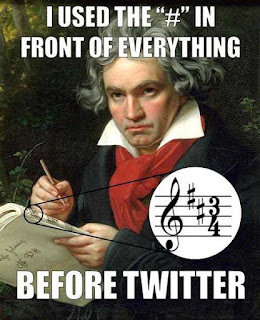 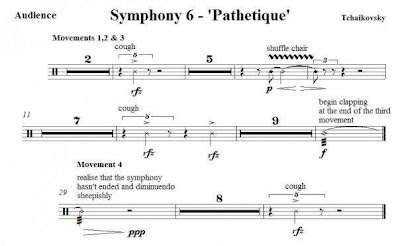 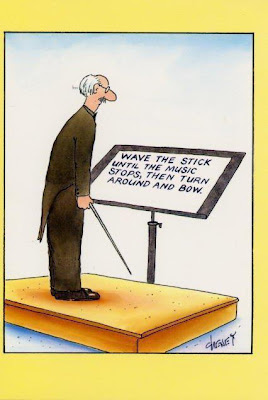 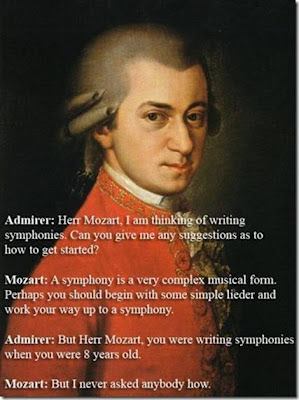 Wish We Were There

Since Vin started running the Roma Marathon I believe this is the first time we haven't been on the side lines with Larry cheering him on.  And it was always such a thrill to see him coming out of the crowd at the end wearing his medal and announcing his time.  Unfortunately today we could only be with him in our hearts. 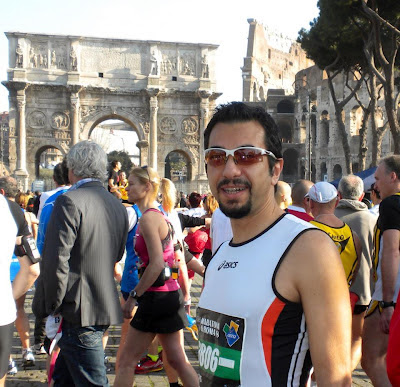 The Marathon starts at the Arch of Constantine beside the Colesseo and goes for 42.195 kms through the city.  The runners go as far West as San Paolo and cross the Tevere five times  to Parco di Villa Glori in the East and back to the Colesseo.  We always waited at various points in Centro to urge him on - leisurely walking from one to the other, I might add, no running for that group. 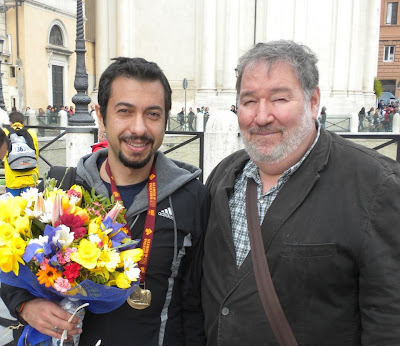 Larry always has a bouquet of flowers waiting for Vin at the end of the race - and there was one year if memory serves a Pooh Bear balloon.   This year Vin completed the race in 3 hours and 35 minutes - which I believe (though they might want to correct me) beat last year's time.


Caro Vin I only wish we could have been there to shout: Vai Vai along the route and offer complimenti at the finish.  And then join you and Larry at Valentino's for a celebratory lunch.

Taking the P**s Out of the Whole Thing

Yes I have an Irish passport and I'm proud of my heritage but on a day like today any true Irishman, or woman for that matter, simply hides themselves away until the rest of the world has pissed out their green beer.

So by way of celebration I offer these two, to my mind at least, highly appropriate little gems - one visual, the other written: And just a click away is "8 Insulting Ways to Act 'Irish' On St. Patrick's Day".

Since August I have frequently joked with friends, saying that I left Canada in their care for four years and came back to a country I am having a hard time recognizing. Sadly it seems to be less and less a joke.

As the circumstances surrounding the last election are revealed and more and more irregularities are brought to light - and not it would seem just with one political party - I am both appalled and ashamed of what is happening in my country. 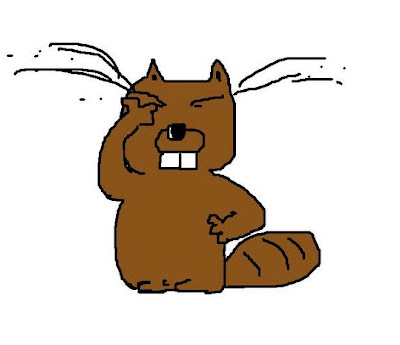 Of course there has always been election jigging - that's one of the reasons the sale of liquor was banned on election day for many years. And there has always been dirty politics - given the nature of the game and the people playing it there always will be. But I honestly haven't seen it as blatantly exposed and at times almost flaunted in the face of the electorate by certain parties as it is now - and I've been a voter for the past 47 years.

Given the revelations of the past weeks I question why the sitting Governor General has not exercised his constitutional powers to dissolve parliament and call another election.   It is obvious that there has been dishonesty and unlawful tampering beyond what we would expect even of our current sorry crop of politicians.  In a truly "just society" these law makers would be treated as the law breakers that they are and their parliamentary privileges revoked.

Seeing what is happening here I wonder how we can have both the audacity to lecture other countries on their election processes and to send "monitors" to oversee a "fair and democratic" election when we cannot guarantee one within our own borders.

For the first time in my life I cam ashamed of my country and of being a Canadian.

13 March - Charles Grey, 2nd Earl Grey, the man who gave his name to the tea blend was born.

A conundrum - no I didn't say curmudgeon that would be me - from my friend Vicki that is easily solved:
You are driving in a car at a constant speed.
What must you do to safely get out of this highly dangerous situation ?
For the answer, click and drag your mouse from star to star.
*Get off
the merry-go-round, you're drunk!*
Posted by Willym at 07:30 2 comments: 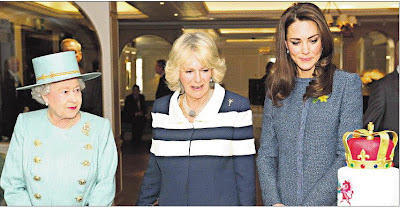 For some reason when I saw this photo today in the Daily Telegraph a song from Monty Python's Spamalot popped into my head.  I believe its called "I'm Not Dead Yet!".

For the Women in My Life

In Italy it is traditional to give the women in your life a sprig of Mimosa in honour of the celebration of International Women's Day. 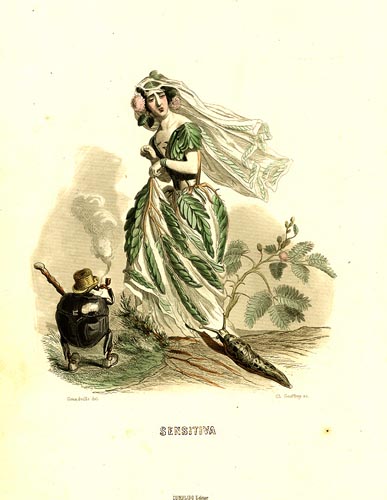 This year I thought I would give all the wonderful women in my life this delightful illustration of Mimosa from Les Fleurs animées by Jean J. Grandville as a way of saying thank you for being part of my life and allowing me to be part of yours.

Though I've haven't forgiven him and his brother for that treacly hymn to cultural homogenization and globalization - Its A Small World After All - the musical delights that composer Robert B Sherman (who died yesterday) and his younger brother Richard gave us as "house" song writers for Walt Disney were part of my early years.

Their score for Mary Poppins has found a new audience since the movie was adapted for the stage in 2004, 40 years after its cinematic incarnation.  But nothing will ever beat the original - pax Dick Van Dyke's horrendous idea of a cockney accent - with Julie Andrews at her most winsome and the Disney Studio animators at their best.  And according to Sherman it took them two weeks to come up with Supercalifragilisticexpialidocious - as if a word like that could be made up!!!!  But what is remarkable - aside from that word that is now part of our everyday lexicon - is how they managed to make the song sound like a Music Hall standard that had been around for years.

One of my favourite Sherman Brothers songs was from a film a year earlier - Summer Magic released in 1963.  I saw it four times and played the record until it was worn down.  I had a crush on Hayley Mills and it didn't hurt that it featured Peter Brown  (sigh - he of the tight cream pants) from The Lawman, who I will admit I had an even bigger crush on!  It was one of those Disney movies that conjured up an early America that sadly only existed in Walt and script writer Sally Benson's (of Meet Me in St Louis fame) minds.  One of hearts broken but quickly mended, crotchety ladies (the wonderful Una Merkel) with hearts of gold, loving and lovely mothers (the beautiful Dorothy McGuire) and avuncular uncles who not only knew how to sing like Burl Ives but were in fact Ives himself.  And Richard Sherman always claimed this was his personal favourite amongst the many songs that filled their catalogue.

Again the Sherman's captured the spirit of an epoch with a fidelity and seeming ease that belie their remarkable talents as song writers.

Given their prodigious output it comes as no surprise that the two brothers were working on a new movie score for a 2013 release at the time of Robert's death.

06 March - 321 AD:  Emperor Constantine I decrees that the dies Solis Invicti (sun-day) is the day of rest in the Empire.