Just a reminder that a right click will enbiggen the photos for a close-up in a separate window.

As I walked down Via Rossini onto the North-East corner of Piazza Ducale in Pesaro I noticed several strange collages embedded in the pavement stones. I don't recall them being there last year but then like many other people I might just have obliviously walked over them. A close inspection revealed that they were historical documents commemorating a piece of Pesaro's 20th century history: the enactment of the Manifesto of Race in July 1938. 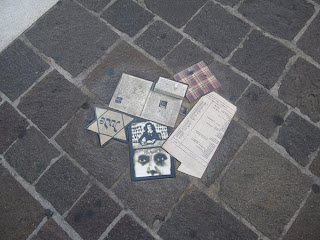 The paraphernalia for enacting the Manifesto of Race - papers to be carried, symbols to be worn and a list of the Jewish population of each European country. Italy shows 50,000 with a further 200 in Albania (then an Italian protectorate).
Prior to that date there had been nothing particularly antisemitic in the founding principles of the Fascist movement, in fact there had been a significant number of Jewish fascists from the very beginning. Of the estimated 47,000 Italian Jews roughly 10 percent supported Mussolini. Many of them also held important positions in the party organization, as well as in local and national government, from education to the military (including admirals and generals). 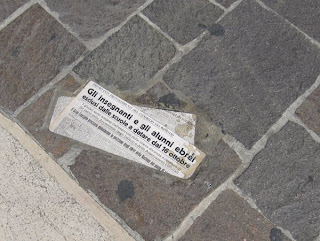 According to this notice Jewish teachers and students were banned from attending schools beginning October 16, 1938
Ettore Ovazza, a Jew from Genova, had served both as a minister in the government and as founder of La Nostra Bandiera, a Jewish Fascist newspaper. Ferdinanda Momigliano, a Jew from Milan, wrote the ultimate Italian wartime cookbooks: Living Well in Difficult Times and Eating Italian were in the house of every patriotic housewife. Margherita Sarfatti, Mussolini's mistress for 27 years, was Jewish and a major influence in his rise to power. 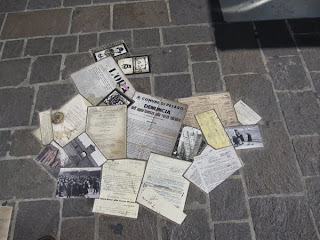 These documents include the orders for the Reporting for Deportation of the Members of the Jewish Race as well as communications for and from officials.
All saw their lives changed with the passing of the new Race Laws. Though the laws applied to any Non-Aryan they were particularly harsh with Jewish-Italians. They were now prohibited from holding public office, military rank, teaching or banking and mixed marriages were declared invalid. In 1943, in an now divided Italy, under the Italian Socialist Republic measures became harsher. Jewish owned property was confiscated and whole sale roundups done in cities throughout the North. Many were shipped off to death camps, others like Sarfatti had already escaped. Some like Ovazza and his family were caught escaping and murdered by the SS. Still others like Momigliano went into hiding; she would have been caught on at least one occasion but a quick thinking greengrocer warned her of the trap. 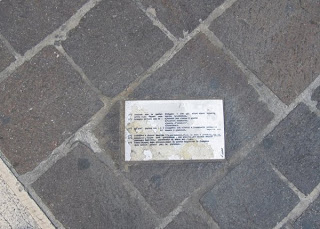 The instructions for the "transferred families" is very specific as to what they can bring with them - Food provision for 8 days, bed linen, a small valise with personal effects, money and jewellry - and what they are to do with apartment keys and other belongings.
A large and influential Jewish community had been founded in Pesaro in 1555 by Maranos fleeing the Inquisition in the Papal States. However by 1901 it had dwindled to a community of 93 and it is difficult to find out how many there would have been when the new laws were enacted. There could not have been many however their fate has been commemorated in this rather odd but in some ways touching tribute. I'm glad I took the time to look down!

Strange how History always catches us up, or may be it is because we shared it...your experience in Pesaro reminds me of my 'discoveries' while walking Berlin last autumn. I came across the Stolpersteine by sculptor
Gunter Demnig, those shiny copper covered stones no bigger than a small hand engraved with identity and date of burial in death camps of those Jews who lived and worked there so that we have to stop, and face it and read at that very spot where they used to live. Active remembrance, very distressing but necessary.

Wow..This is why I'm such a big fan of walkabouts.
You discover things you might otherwise have missed.

Fascinating! I'll pass it on to my husband, who writes books about memorials and memorialization!

Wow Willym, I didn't know about that. thanks for sharing this.

I am glad to know of this. It seems that we are doomed to repeat the past again and again. Remembering and acknowledging such a horror is important. Thanks for sharing this.

Thanks for this information. At least some towns make this gesture of regret and memorialization, whether from guilt, or for PR.
We found similar small stones embedded in the sidewalk in Merano, Italy, a beautiful small town,worth visiting, near Bolzano.

Approximately 1500 Jews were living there when the War broke out. Unfortunately, all but a few (in hiding) were deported, and did not return.