Before he began the third encore of the evening Marco Beasley (left) shyly said "I'm no opera singer," and then accompanied by Guido Morini on the harpsichord, launched into a lovely, quiet and emotional O Sole Mio. I will quite readily admit I had tears in my eyes - there are people who claim to be opera singers who don't have half his voice or ability to communicate. And it concluded a concert that only confirmed in my mind the incredible talents of Beasley, Morini and their group Accordone.

Last year they celebrated the street music of Napoli, this year the programme was a short "opera" using the life of the extraordinary Don Raimondo de'Sangro, the 18th century Napoletano nobleman, inventor, alchemist, philosopher and polymath as its inspiration. Morini (right) created music to Beasley's libretto that reflected the 1700s but did not ignore modern sonics. Ranging from the liturgical to the lyrical Morini called on period instruments, Bearsley's emotive tenor and dancer/singer Vincenzo Capezzuto to pay tribute to a man often thought to be in league with the devil, thence the title La Tentazione del Male (The Temptations of Evil.) De'Sangro's writing were used as part of the text and as where musings on the works of art he had created for his family chapel - including the miraculous Veiled Christ picture below. 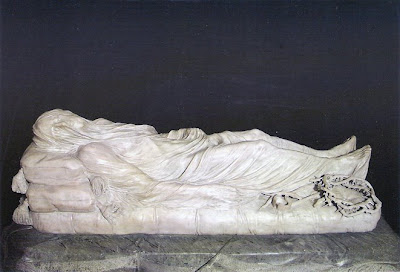 Giuseppe Sanmartino's Veiled Christ was created in 1753 for di Sangro's family chapel in Napoli. The delicacy and power is a miracle of the sculptor's art. One of the wonderful things to be seen in Napoli.

This was the premiere of the work and though there was much to enjoy I would like to have heard it in another venue before passing further judgment. Beasley comes more alive when freed from the constraints of a music stand and the design of the Mozarteum Grand Hall meant that much of Capezzuto's choreography was lost to anyone sitting on the ground level. But several sections stand out as exceptional - the lyrical call to the moon, the dance elegy to the Veiled Christ and two of the tarantella inspired pieces. And every piece was imbued with the two creators obvious admiration for their fellow Napoletano.

Frankly I thought it rather daring of Accordone to premiere this work here as the Salzburg audience can be very conservative but they are audience favorites at the Festival and the almost full house gave them a warm response and demanded three encores. I've already mentioned the final one but the second was a moment of pure inspiration. Beasley announced a lovely serenata La Bella Noeva as the encore, Capezzuto appeared and began dancing. Then he circled the small orchestra and took the hand of cellist Elisabetta De Mircovich and led her over to Beasley. He placed her hand in his and after a moment her voice joined his and gazing at each other they sang of love and the joys of life. It was pure musical magic. And if that wasn't enough to make the eyesight a little blurred then as I said the next encore did the trick. 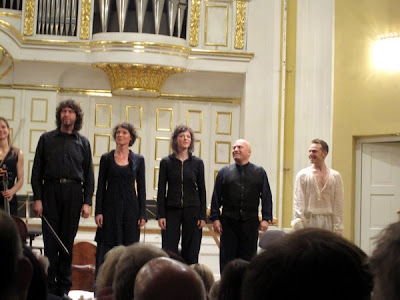 Members of Accordone, Marco Beasley and Vincenzo Capezzuto respond to the applause of last night's audience at the premiere of La Tentazione del Male.
This was the third appearance for Accordone at the Whitsun Festival, sadly they won't be back next year and I can only hope to get to see them again in Italy in the near future. They have added a dimension to the Festival theme of Napoli, a City of Memories, showing that it is very much a city that is alive and treasures its memories and traditions.

Photos of Beasley and Morini from the Accordone website.

wow...dont you love it when music brings tears to your eyes? i felt the same way last night watching pbs and seeing asleep at the wheel, willie and merle

I wish I could have been there. Thank you for making the effort and taking the time to share with us less fortunate. Uncle Pervy.

How wonderful to be there at such a magical, ephemeral moment! Nothing like seeing and hearing the performance as it pours forth from the heart of the performer!

It was a really fantastic and emotional concert..Accordone supose to perform more often in Salzburg..because the pubblic, like me, is tired to listen music where there's no hearth and where just the vocal and the music style is considered..So please we want Accordone
Than you for the magic moments
mike