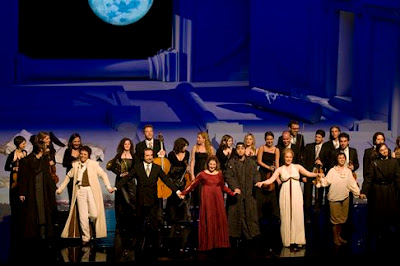 Riccardo Muti, the singers and orchestra take their bows on opening night of Demofoonte.
My friend OC - the one who got me hooked on this Whitsun Festival thing - decided not to show up this year, another chance for a chat and an aperitivo missed. The reasons she gave were interesting and in many ways prophetic:

This year, though, she's staying home, because as yummy as Demel's Esterhazytorte, as historically informed Tomaselli's coffee is, between the fact that Jommelli's musical talent is not on the same level of Paisiello's absolute genius and that Demofoonte, no disrespect intended, is simply not as engaging as Calandrino's crazy antics, OC chose to sit this edition out.

I'm sorry to say she's right. Despite all the efforts that Riccardo Muti, his talented cast and Orchestra Giovanni Luigi Cherubini put into the performance there was not escaping the fact that Demofoonte just didn't do it for me.

For almost four hours we followed the story of the Thracen King and his family - through secret - and possibly incestuous - marriages, switched babies and immovable monarchs and frankly when everyone came down to the fore stage to sing about living happily ever after I was relieved that it was finally over.

Again it had nothing to do with the performance and everything to do with what was being performed. Only when he broke out of the mold of opera seria did Jommelli's score take wing - the trio that turns into a duet ending Act 1, the passages of accompanied recitative and the heartbreaking duet that ended Act 2 all had a power that was lacking in much of the rest of the music. And sadly all the love and work that Muti put into seemed like it could have been directed to something else.

Muti had gathered a cast of young singers - in the case of countertenor Antonio Giovannini too young to be convincing as the old nobleman - and coached them with loving care. Soprano Maria Grazia Shiavo (left with Lo Monaco), as the much put upon Dircea, was the obvious star of the evening closely followed by mezzo Jose Maria Lo Monaco in the travesty role of her husband Timante. In both arias and ensemble passages the two gave intense, dramatic performances and their performance of the fore mentioned duet was the dramatic high point of the evening. Tenor Dmitry Korchak was a ringing Demofoonte but again was unconvincing as a character - though that may have been as much Jommelli's fault as his.

Of the secondary singers Eleonora Buratto (right with Coladonato)as the foreign princess Creusa showed promise of something special on her initial entrance that unfortunately was unfulfilled. Valentina Coladonato sang her arias well but behaved like a young Cherubini with a clothing fetish. For some reason director Cesare Lievi had decided to treat these two as comic figures however most of it was either flat or in the case of Coladonato sniffing Creusa's clothing embarrassing. 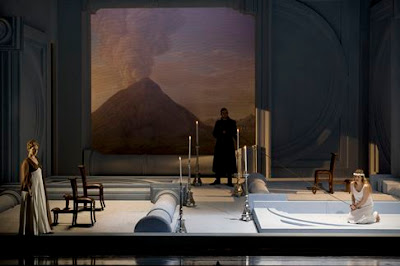 Margaret Palli's stage set is strewn with obstacles for the singers.
Despite his lengthy programme note I did not find that Lievi brought anything original to the staging other than having the two singers en travesti behaving like Principal Boys from Christmas pantomine and the feeble attempts at humour. And frankly I am getting tired of settings that require singers to clamber over inclines and uneven platforms. Yes we know that the world is topsy turvey but singers need two feet planted firmly on the ground to give their best. And I'm sorry but if the damned surtitles say "I give you my hand as a pledge of my fidelity!" shouldn't the singer be doing exactly that not potting a plant?

Rather surprisingly the horn section of the Cherubini had a bit of trouble with the interlude March and were ragged in a few other spots. Otherwise Muti drew from them their normal high standard of playing - its just that what they were playing wasn't very interesting.

As a side note Muti has choosen a Jommelli oratorio Betulia liberta to end next year's Festival and it will be bookended by the young Mozart's setting of the same libretto. It will be interesting to see how the 15 year old genius from Salzburg compares to his older colleague.

Congratulations on the detailed coverage of the performance. I wonder if there is a possibility of the photos to be enlarged and cover the screen of the PC. Especially the one with the maestro in the end of the opening night.
Are you going to see the Missa D. tomorrow? If you are, I've got a feeling that you will be satisfied. Do let us know, anyway.
What's the weather in Salzburg, Willym?
Maria.

YDG: You and me got a date - once I get back to North America I'm going to find the closest place to you that's playing Butterfly and we're going kid!

Maria: Not to sure about resizing the photos - I got them from the Salzburg website. Definetely got tickets for the Messa. Sadly the weather has not been good - rainy (torrential)and bloody cold the first two days but sunny and cool today. Suppose to be better tomorrow but we are leaving right after the concert for Trieste.

Willym I read what you wrote in Parsi's site. The strange thing is that Muti chose this opera for ethical reasons, for he has always stressed the importance of people being ethical. Did you find such elements in the plot?
Maria,
Atene.