Milano is a city of trams - you can’t miss them. The streets are a jigsaw puzzle of tracks and garlanded with overhead wires. The squeals of metal against metal and the clanging of warning bells are a constant late into the night. And that strange sound they make as they trundle along is always in the background in certain parts of the city. 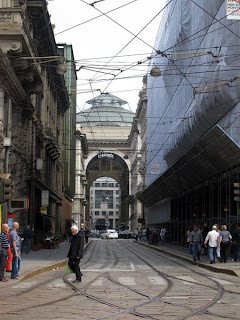 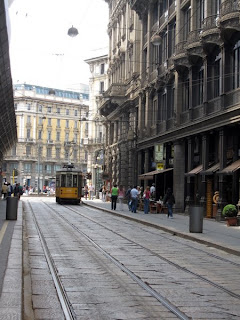 There are 18 different lines chris-crossing the city and though many of them are sleek new Eurostyle cars an equal number are clattering old trams from the 20s and 30s. Restored with glossy wooden benches, metal poles, leather straps and old fashioned controls - they have an air, a romance, that the newer plastified models lack. I’ve been assured that riding in them during the extreme cold this past winter was not very romantic and there were some problems with the tracks and ice - but then this past year was unusual. On a balmy - well actually hot and humid - spring day it was great fun to chug through Centro from the Castello Sforza to my hotel. 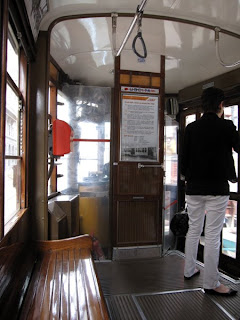 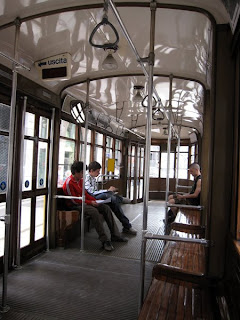 And the people at ATM(Azienda Transporti Milanesi)are obviously aware of value of these old cars and the romance associated with them: they are kept on the major routes in Centro and tourists love them. And late Saturday night I saw a chartered tram trundling along packed with a festive crowd of young people dancing, drinking and singing their way down Via Manzoni. 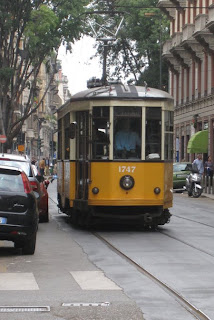 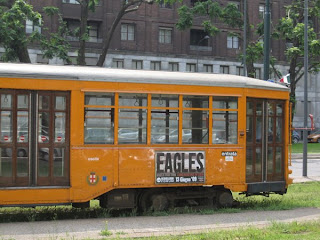 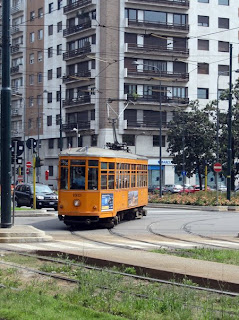 YOu have a great knack for taking photos of the ordinary and making them really interesting.
DF

Those are pretty, can you take puppies on them?

boarding these trams....sometimes you don't even have to pay! if i remember correctly, last time i was there, the drivers didn't bother to check or even asked if i've validated my ticket.i'd say good for the tourists' pocket but bad for their system. ohhhh the passive lifestyle in Italy is so apparent even in a commercialize city as Milan!

Sage: Yep provided they are on a leash and have a muzzle - yeah like the locals pay any attention to those rules!

Dora: Exactly the way a tram should look! Not those sleek modern things.

Flipstinger: Ah but don't ever get caught by the inspectors - saw them nail three people on Saturday on the tram I was riding. The fine is something like E150.