Trying my best not to do an impersonation of poor little Mimi or one of those other fragile operatic heroines I sucked back a tin of eucalyptus cough drops and headed out to the Parco del Musica a few Thursdays ago. There was no way I was going to miss this concert - Cecilia Bartoli had brought her Maria Malibran show home to Roma and if all the opera queens where going to be there so was I - come death or destruction.

Now there are some blogs where La Ceci is shredded into little pieces by the cognoscenti- she's breathy, the voice is too small, she makes strange faces and contortions when she sings, her repertoire is too limited and the sniping and bitching goes on and on. Like many of these posters, whose greatest complaint seems to be that she's successful without having to appear on some of the world's larger stages, I had only heard her on CD or seen her on DVD so I really wasn't sure what to believe. Yes there are times on record when she sounds like she's climbing Mount Everest and yes there are some strange facial tics when she throws off the coloratura runs she is famous for. But to all those commentators all I can say is: desert your Ipods and flat-screens ladies - go and see her in person 'cause the only way to judge La Ceci is on stage. 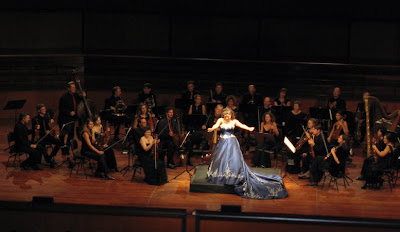 Resplendent in royal blue and sporting a diamond necklace, Cecilia shows us how a Diva accepts her due. She knows we love her and damn she just loves us back.
My dear friend and She Who We All Love to Obey Opera Chic saw the same programme in Milan a few nights before and wrote about it in her normal witty and wise manner so I won't even try to compete. I agree with much of what she says - once past the Romantic stuff, which frankly isn't to my taste either, we heard some of the most incredibly virtuosic singing that can be heard today. And she is definitely a stage animal - her connection with those around her and her audience was electrifying. As OC says we may not know what Malibran sounded like but I won't let any of the opera bitches tell me La Ceci isn't in the same league! 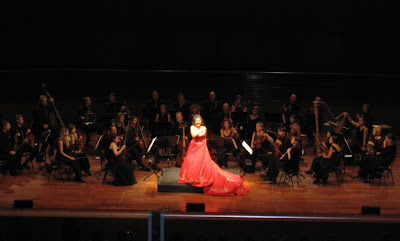 And a Diva who wants to give her public a treat changes gowns for the second part of the programme. The necklace may be gone but the voice sparkles brighter than the diamonds anyway.

OC mentions La Ceci's interaction with the instruments and no where was that more apparent than in the Willow Song and Prayer from Rossini's Otello. Much of Asisa appiè d'un salice is a duet for singer and harp and here the two shimmering sounds intertwined until at one point they were indistinguishable but what I found most striking was the incredible half-voice she used for the repeat. It was a distracted whisper but a whisper that reached the back wall of the auditorium. Dramatically it was intense and as telling as all the glittering flights of coloratura in later arias. That to me was one of the most breathtaking and heart-stopping moments of the concert.

The other Rossini numbers showed of her lightening coloratura with the Cenerentola rondo - one of her signature roles - getting two outings; the second as an encore with new variations. And a little encore item written by Malibran's father the great Manuel Garcia was utterly delightful - it was fortunate that a small flamenco ensemble just happened to be waiting in the wings just in case we called for more. Laurent wondered out loud what would have happened if we hadn't demanded an encore - as if that was going to happen!

I have never understood the disdain so many people have for Sra. Bartoli. But then I am not an authoritative source on all things opera.

I've never had the opportunity to see her in person, but I have enjoyed her recordings and seeing her on PBS broadcasts.

It seems our fate to be fans of ladies named Cecilia.

I feel like a heathen..other than a few select operas most of them are like foreign territory to me.I'm more of an oldies/goodies and willie and waylon kinda gal..