Beside Every Great Man

Tuesday I took my last tour - for a while at least - with a dear friend who is  an art historian par excellence. One of the joys of living here has been to see so much of Roma through her eyes, with her guidance and encyclopedic knowledge.  And often,  because of her contacts, I've gotten into places on her Monday/Tuesday walks that most people - even Italian friends - have only seen from the outside. But with her as your guide even the "regular" walks take on a special flavour because she has the enviable ability to make things spring to life.

This week she led us through the sites on the Janiculum Hill that figured in the Siege of Rome - that bloody two months in 1849 that saw the end of the short-lived Roman Republic. On April 30 a force of some 5,000 people including anti-clerical Travesterini, Garibaldi's revolutionary army and citizen-soldiers held the highest point in the city and drove Napoleon III's 10,000 strong French force back to the sea.  In a truly operatic gesture, that I can't imagine happening anywhere else, a band played the Marseillaises behind the Italian lines to remind the French that they were all revolutionaries.  Wounded French prisoners were treated and returned to their regiments and a truce allowed French citizens living in the city to leave.  However bad diplomacy on the part of Mazzini and duplicity on the part of the French, who broke the truce a day early, eventual led to the defeat, after a fierce defense, of the Republic on the evening-morning of June 29th-30th. On July 2 Garibaldi and his followers left the city to seek refuge in San Marino. By Garibaldi's side, as she had been so often since they first met in Brazil in July 1839, was his Brazilian born wife Anita.  It is said she was garbed as a man the more readily to avoid detection as they crisscrossed Italy pursued by French, Austrian, Spanish and Papal troops. 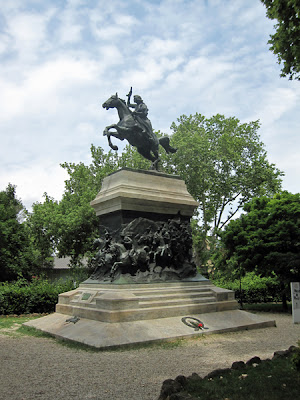 Of all the monuments to the Siege that dot the Juniculum today - and a phalanx of busts of Garibaldini ring the paths in the park - perhaps the most powerful and touching is one nestled in a grove of trees that could be easily overlooked.  It marks the resting place of this remarkable woman.  The story goes that when the young Garibaldi - tall, fair and imposing - saw the tiny dark but strangely beautiful 18 year old all he could murmur was "Tu devi essere mia" (You must be mine). And his she became and was to remain for the eleven years she fought beside him in both the Old and the New Worlds.

She was either already unhappily married or at least betrothed when they met - and leaving everything behind joined him on his ship, the Rio Pardo, in October 1839.  In November she was fighting along side him in the republican battles at Imbituba and Laguna.   She was to be with him in most of the battles to follow and his companion in the game of cat and mouse he played throughout South America and Europe with the pursuing authorities.  She taught him many of the riding skills that were to prove so useful on the battle field and in evading capture. 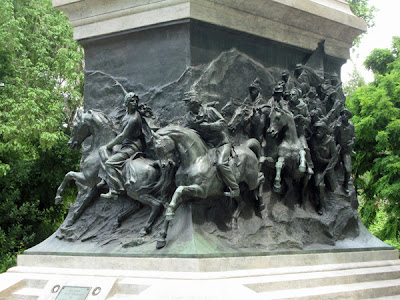 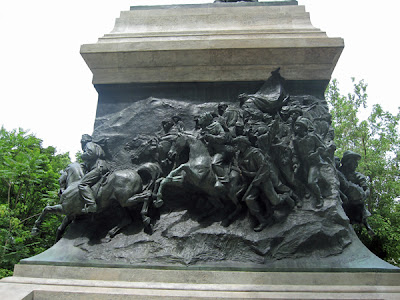 The bas-reliefs at the base of the statues elaborate on the dual image of Anita - as fighter and as helpmate.  She is shown beside Garibaldi in a charge which it appears she might well be leading.

On September 16, 1840 their first child was born and given the name Dominic after Garibaldi's father, but he was nicknamed "Menotti" in honour of Ciro Menotti a patriot and beloved friend.  On September 28 - 12 days after - she evaded capture and escaping through a window and grabbing a horse of the Imperial Guard fled to the woods.  She remained hidden for four days without food and nursing a newborn until her anxious lover/husband/leader found her.  It was not to be an unusual story for the couple. Their life was to be stuff of adventure novels and in many cases its difficult to separate the historical fact from the romantic fiction. 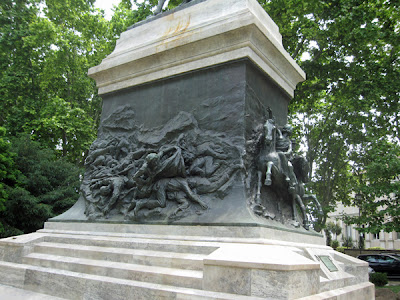 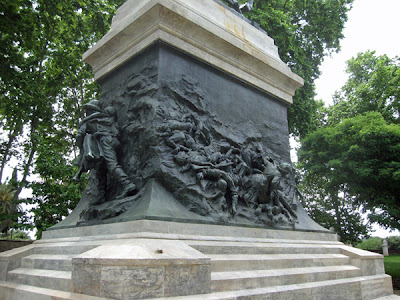 In the second tableau Anita is seen on the battlefield tending to the needs of the wounded and the dying - the warrior queen now the caring mother.

In April of 1849 when Garibaldi headed to Roma Anita, in her fourth month of pregnancy went to Nice to stay with his mother.  Even at that point she was suffering from what was quite possibly malaria and in a weakened state.   However on hearing of her husband's latest fight she left her four children with her mother-in-law and joined him in Roma in June.  She witnessed the fall of the Republic and was once again was with him and his followers on a forced march through Italy.  They crisscrossed the country on foot and on horseback, across mountains and rivers - getting food where they could and hiding when necessary.  Her condition worsened and in the area of Mandriole Garibaldi and his faithful adjunct Captain Leggero took her by skiff and then on an old mattress to the farmhouse of a patriot name Guiccioli.  A doctor was called but she was beyond help and died in Garibaldi's arms on August 4th at the age of 28.

Knowing the danger that Guiccioli would be in if it was found he had given the revolutionaries refuge and mindful of their situation,  Leggero convinced Garibaldi to flee and arranged for a hasty burial in a shallow sand grave.  Six days later the body was accidentally discovered - it had been uncovered by wild dogs - and proper burial arranged in nearby Mandriole.  However even in death poor Anita was pursued and not allowed to rest in one place.  The Papal authorities exhumed the body and after an autopsy gave out that she had died from "unequivocal signs" of strangulation and stated that Garibaldi to avoid being encumbered by a pregnant wife had choked her to death.  The calumny was quickly denied by the doctor who had attended her and all facts point to a fabrication in an attempt to discredit the Hero of the Two Worlds. 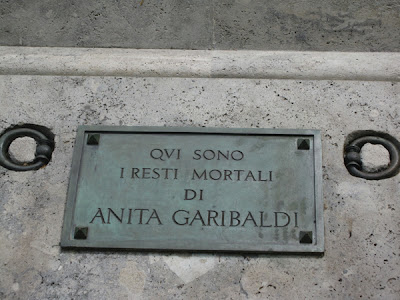 In the following decade Anita's body was to be exhumed 7 times until in 1859 she was moved, at Garibaldi's request, to the Garibaldi family grave in Nice.  Finally in 1932 her remains were laid to rest at the base of the statue that had been erected to honour her on the Juniculum Hill in the city where she had fought her last battle along side her husband.

Wow! What a short, tumultuous, romantic and heroic life! Yes, it's quite the feat to balance that big heavy sculpture on two slender horse legs.