A few final comments on this year and next years' Festivals and then probably another of those prolonged silences I've now become known for.

As with any festival there are bound to be highs and lows - not always the fault of the artists or the artistic director doing the programming.  What often looks good on paper falls flat when realized.  Of the seven events we took in a this year's Pfingstfestspeil I can honestly say the the highs set the bar at such a level that in many other venues the lows would have been considered highs.

The highlights?  Do you have to ask?  It will be a long time before I see or hear that Norma equalled and the Gubaidulina-Shostakovich double bill made me an emotional wreck. The low?  I'm afraid the Haydn Seven Last Words left me wishing I had spent the afternoon sipping Aperol Spritz on the terrace of the Cafe Bazar.  That's how high the bar was this year.  That Bartoli girl knows how to put on a damn fine festival.

On the Sunday evening as we sat enjoying a nightcap in the Sketch Bar our friend Dr. M. showed us the prospectus for 2014.  It came as a bit of a surprise and a lively discussion broke out about the merits of returning or not.  Rossinissimo! trumpeted the title - and in her preface La Ceci waxed enthusiastic over the beloved son of Pesaro.  And frankly who better?  Much of her early reputation was built on her appearances in Il Barbiere and Cenerentola and recently she has appeared in Conte Ory and Otello.   Now as much as I love Rossini when I couple his name with Festival I think of our August trips to Pesaro.  Did I really want to come back to Salzburg in June for what I could see in August on the sun soaked shores of the Adriatic? 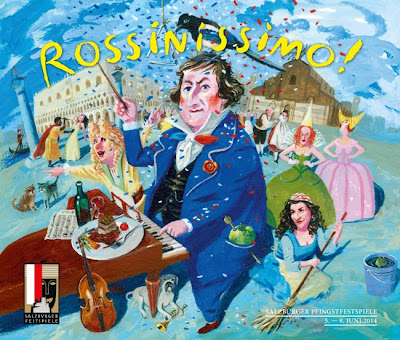 Well Cenerentola is my favourite Rossini opera and I had never seen La Ceci sing Angelina; Otello is a work I've been fascinated by since I read an article in Opera News more than 50 years ago and she has put together an interesting cast (always a challenge when you need three - not the Three - tenors).   As she showed this year, she may be the artistic director and the nominal star but she surrounds herself with performers of equal star quality.  So yes we get La Ceci in Cenerentola and Otello but the supporting casts include Javier Camarena, Nichola Alaimo, John Osborn and Barry Banks.  But the programme bracketed by the two operas is even more fascinating.  Franco Fagioli singing music of Meyerbeer and Rossini; David Fray playing Rossini, Liszt, Mozart and Bach; Antonio Pappano exploring the religious Rossini - first the Stabat Mater with his Accademia di Santa Cecilia, Krassimira Stoyanova, Elina Garanca, Piotr Beczala and Erwin Schrott on the Sunday morning then the Petite Messe Solennelle with Eva Mei, Vesselina Kasarova, Lawrence Brownlee and Michele Pertusi in the afternoon; Joyce DiDonato giving us Venetian songs by a parcel of composer; and strangest of all A Grand Rossini Gala and dinner.

That gala is the oddest item of the programme - unless you count Il Barbiere by the Salzburg Marionette Theatre, though I like to think of that as inspired - with a parade of singers that is honestly a little frightening.  Fine Bartoli, Kasarova, Ildebrando d'Arcangelo, Camerena and Michele Pertusi are remarkable in the current crop of Rossini singers; however,  as much as I love and revere them I am honestly trying to think what Agnes Baltsa, Teresa Berganza, Monstserrat Caballe, Jose Carreras, Leo Nucci and Ruggero Raimondi can possible sing at this stage of their lives.  Sometimes it is best to be left with your treasured memories.

As tempting as the programme looked, and Christian, our host at the Bristol, kept pointing up all the positives, we  decided that we'd go elsewhere for our musical pleasure in 2014.  Our Festival friend Dr M firmly avowed the same.  Just before leaving for Füssen on Tuesday morning we ran into the good Doctor who admitted to having just returned from the box office and they would mail his tickets to him later in the week.

We chortled at his lack of resolve and headed out to the train station.  We would never be so weak-willed. 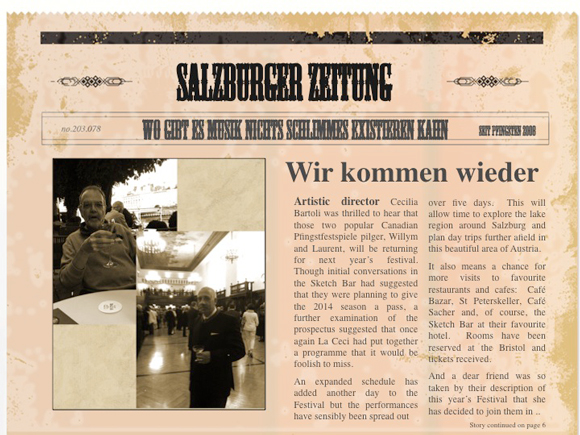