One of the joys of being back in Europe - hmmm where do I start the list - is the food.   As I mentioned a few days ago it was spargal season in Germany and Austria but Spring is also the time of year for Wild Garlic or Bear's Garlic.  Many cafes and restaurants featured this woodland green on their spring menus in salads, dumplings, presto  and soups.   After my first taste at the hotel in Munich I tucked into variations of   the soup on three more occasions during this trip.  I would have loved to try the dumplings but I went off my gluten-free diet once or twice during the trip and paid the price.

There are as many variations of the soup recipe out there as there are cookbooks and blog writers and  most of them use a potato and stock base.  I'd like to try this in the next few days particularly as the weather is still on the chilly - if not downright cold - and a vibrant green bowl of fragrant soup is always good on days like this.  We do have a close relative of this flavourful plant here in Canada - the Allium tricoccum - which can be found in some markets this time of year.  There has been some controversy over its sale here in Ottawa as it is considered an endangered plant in Québec and poachers have been caught in the Gatineau Park.


As well as a time for new growth Spring has also been the time for sacrifice in many cultures and lands – the gods or more often simply the earth demanding an offering and in return giving a good harvest. It is a ritual almost as ancient as the human race.

In 1913 Igor Stravinsky and Vaslav Nijinsky scandalized Paris with their Le sacre de printemps. The legends around what occurred at the Théatre des Champs-Èlysées on May 29 are many and as with all legends have been embroidered over time. Certainly there was a riot with much of the displeasure directed at Nijinsky, who had upset the dance aficionados a few weeks before with his ballet Jeux. But Stravinsky came in for his fair share of brickbats and boos – the orchestra had almost refused to play the score and probably what was heard that first evening had a roughness to it that has long since lost its edge as orchestras learned different techniques since that first performance. 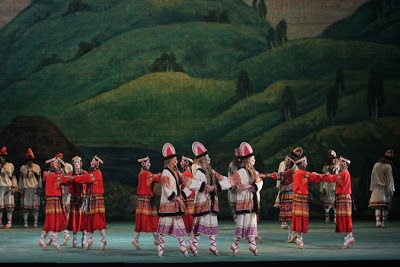 Nijinsky's choreography – much of it apparently influenced by Dalcroze Eurhythmics  – has been long lost. Never repeated after its initial 10 performances (6 in Paris and 4 in London) and certainly never notated the only existing records are photographs, written descriptions and the memories of Marie Rambert who had assisted Nijinsky and danced in those first performances.  Given its unknown state I thought it was odd that the Mariinsky announced that the production (scenes above and below) they were bringing to Salzburg would give us the original decor, costumes and choreography! Certainly the colourful costumes and sets were based on the original designs by Nicolas Roerich, a well-regarded painter and an authority on Russian tribal dress.  But how close Millicent Hodson and Kenneth Archer's “reconstruction” comes to what that audience saw 100 years ago is questionable. Yes many of the poses match the still photographs taken at the time but as Laurent remarked a great deal of what passed for “choreography” seemed to be running around in circles. This is not to say that there were not moments of beauty though they tended to be more tableaux than movement.  Strangely the sacrificial dance of the Chosen One had minimal impact - I recall the first time I saw a version of Sacre with the Royal Ballet, Monica Mason imparted an almost fanatical hypnotic fatalism to this dance to the death.  Here Daria Pavlenko's collapse came out of nowhere and frankly had very little effect. 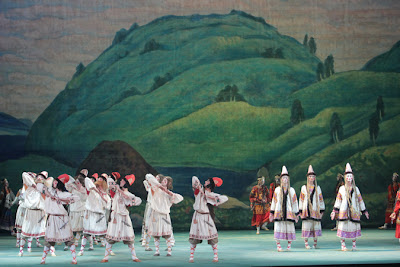 What made it more than just an interesting exercise in historical speculation was the playing of the Mariinksy Orchestra under Valery Gergiev. As I said for us Sacre will never have the raw savageness that so offended those earlier audiences but Gergiev brought an edge to it that caught much of the primitiveness at its core. If only the choreography and dancing had matched that high standard it would have been a remarkable dance event rather than just a curiosity. Unfortunately that was to also be the case with the remaining two works: L'Oiseau de feu and Les Noces.  It was almost as if the Mariinksy had decided that since they were sending us Gergiev and the orchestra that a second string troupe of dancers would be acceptable.  Pavlenko was the only company Principal in the group with the rest of the casts being drawn from the Second Soloist and Corphyée ranks.

Visually L'Oiseau was colourful – again based on original designs from 1910 however with the curtain lowered for the transformation scene – but the dancing left much to be desired. Alexandra Josiefidi's Firebird lacked both grace and, well, fire. She remained essential earthbound at her entry and remained so for the rest of the ballet. Ivan Sitnikov's Prince lacked any sense of nobility – he was far better cast as the bridegroom in Les Noces.  And again there seemed to be much running around in circles from the corps during the scene with Kaschtschej and his hoards of demons.


Of the three I would have to say that Les Noces was the most successful and most interesting.  Though the programme listed the choreography as Bronislava Nijinka's original it is actually a version staged in 1981 by her daughter Irina for the Oakland Ballet.  The Mariinksy dancers were taught it by Oakland ballet master Howard Sayette  and it was introduced into their repertoire in  2003.  Thus we had Nijinka's dances twice removed and there has been some heated discussion in the ballet world as to how closely it followed her original concepts.  I have only vague recollections of a production at the Opéra in Paris back in the late 1980s so can't speak with any authority on the authenticity of the Kirov version.  There is also some debate about the Kirov dancers being able to assimilate a style of dancing that is foreign to their classical training. 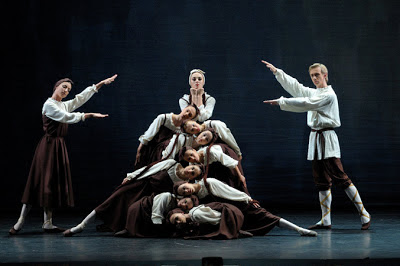 The ballet (scenes above and below) is a reenactment of a Russian village wedding - not a riotous celebration but a rigid social act performed for the good of family and community - the sacrifice of the bride if you will.   Stravinsky took folkloric wedding texts compiled in the 19th century by Pyotr Kireyevsky and with only four pianos and a large percussion battery created a choral ballet filled with the character and rhythms of Russian folk music.  Nijinska matched it with austere movements and patterns which despite their impersonal coldness take on a sense of the profound and become emotionally moving as the ballet progresses.  Natalia Gontcharova's simple brown and white costumes and stark sets highlight the impersonality of the ritual being enacted and  focused attention on the movements and patterns. 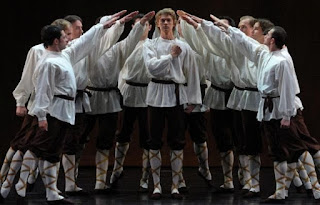 Though the male corps lacked a degree of control and seemed almost uncomfortable with the choreography  the female corps (as one expects of the Mariinsky) wove the  rectangles and pyramids with ritualistic discipline.  Maria Shevyakova brought a poignancy to her portrayal of the Bride - the unwilling pawn in the eternal game.  And for all his lack of nobility as the Prince in L'Oiseau Sitnikov brought exactly that quality to his Bridegroom. 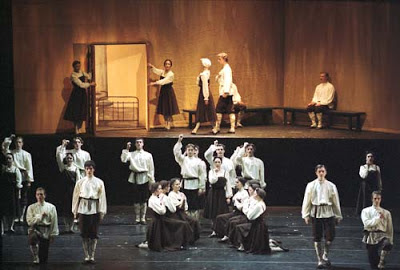 Lest I make it sound like less than an afternoon well spent it did have many positives: the chance to see three important 20th century dances pieces; the opportunity to see productions that visually were inspired by the revolutionary original designs; and the opportunity to hear three of the seminal pieces of 20th century music played by one of the world's top orchestras conducted by one of today's great conductors.  Conceptually and musically it was an exceptional afternoon - if only the dancing had been on the same level it would have been a great one.

The more I read about Nijinsky's choreographic genius - and there's a good popular biography just out - the more I understand that the 'realisation' of the 'original' Rite must be a total travesty. It's all so tame; Nijinsky's work, by all accounts, was never that. And Stravinsky was emphatic, at least in 1913, that its novelty and earthiness matched the ferocity of his music. Does this one? Not a bit.

We've just had Gergiev in Trafalgar Square conducting the LSO in the Symphonie Fantastique. Unfortunately they had to skip the Scene aux Champs because of the bus roars and helicopter drones...why not a pops concert of exquisite music by Chabrier and Delibes, say I. The Witches' Sabbath did at least raise an invisible roof. And the weather was glorious.