The Salzburg Pfingstfestspeile has undergone quite a few changes since its first inception in 1973 as a celebration of the Baroque.  Initially it concentrated on orchestral works of the period with the odd excursion into the operatic or choral.  It was often regarded as the poor step-sister of the bigger (and better known and financed) Summer Festival until 2007 when Riccardo Muti took over as artistic director. 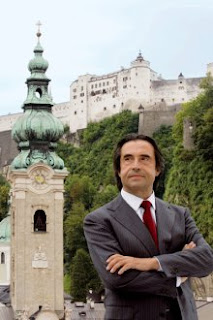 Under Muti the Festival, in theory, became a celebration of things Neapolitan, though even then the relationship between the stated mandate of the Festival and what was programmed was often tenuous at best.  There were several constants - the Festival began with an operatic rarity from the 17-18th century conducted by Muti and ended with a choral work - cantata, mass, oratorio - from the same period again with Muti at the podium.  His Luigi Cherubini Youth Orchestra were always in the pit and the singers were often younger singers making first appearances on the world stage.  The concerts scheduled between the two "main" works were varied in content but always high in quality.  However by year four I had found the programming had become a bit tired and there was the odd concert in 2010 that lacked real interest.  We skipped the last year (2011) of his directorship, though we did see the opera from that year's Festival - Mercadante's Il Due Figaro -  in a later performance at Ravenna.

We also missed the first year (2012) of Cecilia Bartoli's directorship.  Her's was a controversial appointment - La Ceci has always had her detractors, but then what diva hasn't?  Rather than a predominately baroque theme last year she chose to build the programming around Cleopatra.  This allowed her to display both her interpretation of Handel's heroine in Guilio Cesare with an all star cast but also offer a varied programme of arias inspired by the historical siren.  For the remainder of the Festival she was able "to call in her markers" as an regular Festival goer remarked to me today and get some of the bigger names to present orchestral, vocal and choral programmes.  According to Festival publicity 2012 was a banner year for attendance and profits.

The programme for this year was announced - as it has traditionally been -  on the final day of last year's festival and we mulled over the idea of coming for 2013.  We mulled it over for two days then ordered our subscriptions with that air of optimism you always do when planning things a year ahead at my age. 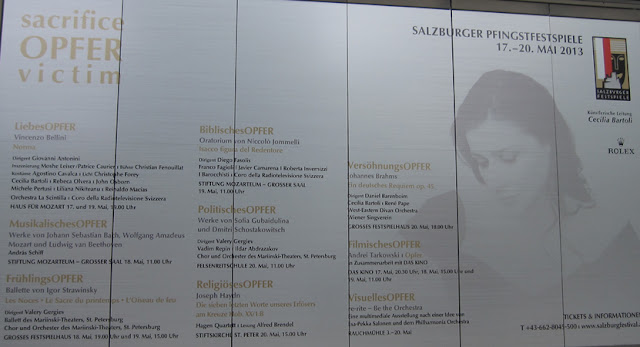 The theme for the 2013 Festival was announced as being one concerned with Opfer - a German word that can mean Sacrifice, Offering or Victim.  I must admit I was a bit leery as this was also the title of Bartoli's album that was being released shortly thereafter.  There had been rumours that the Decca machine was pretty much manipulating things at the Festival as a sort of classical product placement.  But a quick scan of the on-line brochure assured me that it was a varied and in many ways exciting series of performances.

So here's our line up for this weekend:

May 17:
LiebesOpfer (Love's Sacrifice):
Bellini's Norma in a new critical edition by Maurizio Biondi and Riccardo Minasi based on an original manuscript - with Bartoli as a mezzo Norma and frankly lighter voices than we are use to in this great "romantic" work.  It should be an interesting break with tradition.

May 19:
BiblischesOpfer (Bibical Scarifcie) - Jommelli's Isacco Figura del Redentore.  A bit of a return to the baroque origins of the Whistun Festival with a setting from 1742 of the story of Abraham and Issac.

FrühlingsOpfer (Spring Victim) - Three ballets by Stravinsky:  Les Noces, Le Sacre de Printemps and The Firebird.
It's the 100th anniversary of the scandal that was Sacre and the Ballet of the Kirov says it will be reconstructing the original choreography that cause such a riot in the Paris of 1913.  I'm still trying to figure out how Firebird fits into the sacrifice theme but any opportunity to it and the Kirov...

May 20: A day crowed with events.
PolitischesOpfer (Political Sacrifice)
Where the Mariinsky Orchestra is Valery Gergiev can not be far behind - or in front in this case.  A fascinating programme of two works that had political repercussions for their composers: Sofia Gubaidulina's Offertorium and Dmitri Schostakowitsch's Symphony #13 - Babi Jar.

VersöhnungsOpfer (Reconciliation Offering)
Brahm's Ein deutsches Requiem bears no resemblance to the traditional mass for the dead but speaks to the reconciliation of the soul with its god.  This performance should be interesting on many levels:  it features Cecilia Bartoli, René Pape and Daniel Barenboim conducting his West-Eastern Divan Orchestra.  Made up of young musicians from all over the Middle-East, and I do mean all-over, it is reconciliation in the true meaning of the word.

I must admit that looking over the programme - particularly that busy Monday - that we would have to sacrifice a few things ourselves - like aperitivo and eis caffe on the terrace of Cafe Bazar or dinner in the Sketch Bar at the Hotel Bristol. But somehow I think we can fit it all in.

That's festival mania for you - it all sounds wonderful and varied (though the Austro-German mania for concepts doesn't get us very far) Awaiing the report (but don't go spoiling your holiday with the need to write about it straightaway).

You wouldn't have got anything like the 'original' Rite since no-one knows exactly what it was and, reading about Nijinsky's modernity, I don't see any of that in the Hodson reconstruction - though it looks quaint and pretty, of course.

I was nearer than you thought - similarly enjoying festival mania in the Handeliana of the Goettingen Festival. Some spectacular events - Joseph and his Brethren, Lucy Crowe singing Cleopatra arias dazzlingly (possibly the best Handel singing I've ever heard) and a bewitching mandolinist called Avi Avital. Sadly the main opera, Siroe, Re di Persia, did not match those events on any level except the orchestral.