In the Face of Grief

I met Elizabeth several years back when I received a request to use a photo I had taken for a series of frankly silly pictures she was featuring on a Flickr page.  Through that request I started reading her blog and being struck by the humour and grace with which she greeted much of what the world handed her - good and bad.  And often the bad was extremely bad - and often she turned that into a source of creativity.  In response to yesterday's sadness in Boston she wrote a poem that expresses the "communal national grief" that is being felt by so many.  She has given me permission to post her  poem as a way of allowing you and I share that grief. 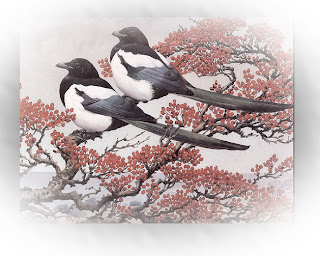 The thorn tree in my yard
is six feet high and wide, with a crop
of inch-long needles bristling
along its branches. Yet it holds, within it,
a flock of trilling fluttering
sparrows. When I walk by
they quiet. But one foot past and they begin
again, caroling and chuckling.
In its dangerous arms they dart, turn,
then light unscathed
beside spiked teeth that bite me
bloody when I have tried
to trim it. I am so blundering, so
soft, so easy to wound.
The small deft birds laugh
behind my back and I long
for their winged grace
in this world of thorns.


April 16 - 1170 BC - The calculated date of the Greek king Odysseus' return home from the Trojan War.

She is indeed a talented poet! I love the imagery of that poem and yes, so fitting for our world.

Absolutely, such a wonderful poet. I occasionally look for signs of life on her blog, but there have been none for a very long time now. I know she was caring for a mother who had Alzheimer's: I hope she's OK. Send her my very best wishes if you're in touch.