While searching for information on the Monstra dell'Acqua Felice I was a little confused - granted not an unknown state but in this case understandable. I had been told that it was called Fontana di Moses (The Fountain of Moses) and found a good deal of information on the Internet under that appellation. But another source kept referring to it as the Mostra and even more history, facts and fables showed up on a search. And, as these things tend to do, one search led to another. And sources became a bit confused - there didn't seem to be any agreement on something as basic as who sculpted the statue of Moses in the central arch. I've tried to make sense of it but whatever its story, the important thing is that another glorious bit of the history of Roma has been restored and refreshed. 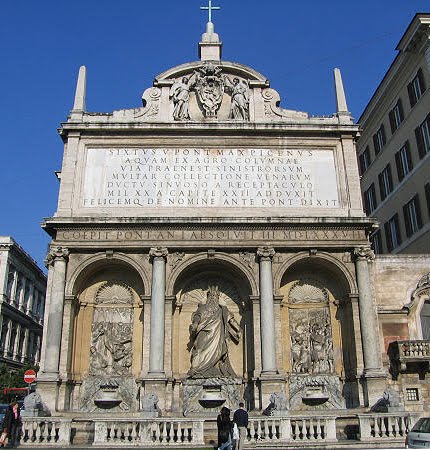 The Mostra dell'Acqua Felice as I first remember it in August of 2007 - just roll your cursor over it to see what greeted me on my early morning sojourn this past weekend.
A "Fontana" becomes a "Monstra" not just because of its size and its elaborate structure but because it is the public monument to the construction of an aqueduct - and a celebration of the person who commissioned it. Sextus V had the new aqueduct - the first in Modern Rome - built following the lines of the old Alexandrina, Claudia and Marcia aqueducts into the city. He may have enjoyed tearing down pagan Roman to the glory of Christianity but he was no fool. He recognized - or rather his engineer Giovanni Fontana did - a good thing, pagan or not, when he saw it. Those aqueducts still supply the city and its fountains with water today. 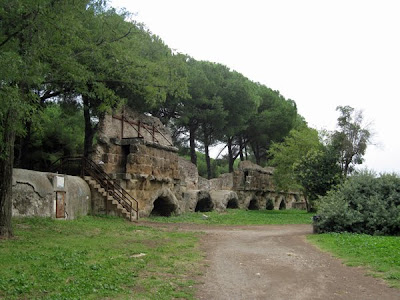 The source of the water is some 24 kms from the Mostre and originates with a spring at Pantano Borghese in the Castelli region. The above ground part is visible at the Parco dell'Acqueduct (above) running beside and at times on top of the Acqua Claudia.
So why "Felice" rather than Moses? Well the good Pontiff's name, pre-Triregnum, was Felice Peretti di Montalto and he never quite let go of it even after assuming the Throne of St Peter in 1585. And of course there is also the meaning of the word "felice" = happy. The new aqueduct brought water to an area that had been waterless for almost 900 years and with the water came new buildings, people and life back into the Quirinale Hill. This wasn't quite a selfless gesture as it also brought water to his own Villa Montalto as well as the 27 public fountains in the Rione. 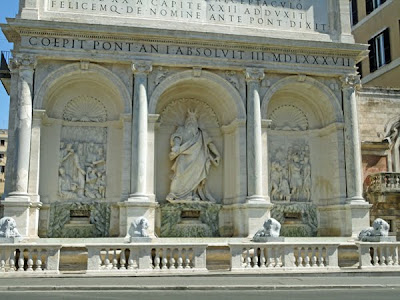 The main body of the monument was built along the lines of a Roman triumphal arch with three arches atypically of identical height; Sextus may have not liked those pagan ruins but wasn't above borrowing from them if it would enhance his glory and send a message. And the Mostra was meant to send a very strong message. The reference is - as is befitting a commission from a Pope consumed with the Counter-reformation - Biblical and the niches hold three episodes from the Exodus of the Jews from Egypt. It is a reminder to the populace that the Church (Catholic) was seeing to their wants and looking after their well being while those filthy Protestants neglected their earthly needs.

I can't seem to find agreement on the events depicted other than the centre panel. Of that there can be no question: Moses strikes the rock that brings forth the water promised by God for the parched people of Israel. The allegory couldn't be any plainer - Sextus, the elect of God, brings water to the parched people of Rome. Conveniently Moses's disobedience of God's instructions and God's punishment for those transgressions seems to have been forgotten. 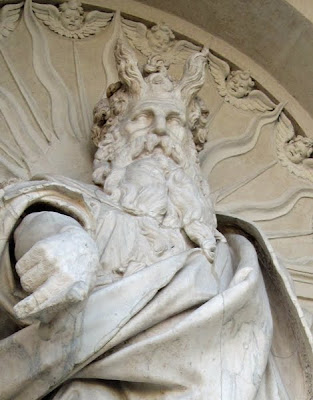 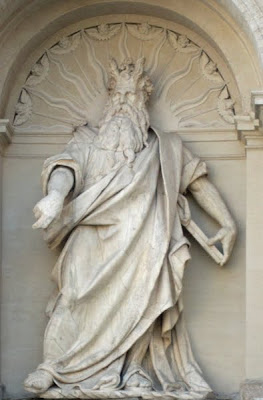 Like the work of his great predecessor Michelangelo, Bresciani's Moses has a pair of horns. This was based on the description of Moses' face as "cornuta" (horned) in the Latin Vulgate translation of Exodus 34:29-35. The Greek Septuagint and Hebrew Masoretic use words meaning "radiant", suggesting an effect like a halo. But those horns gave Western artists of the period a convenient attribute by which Moses could easily be recognized in crowded pictures.
The central niche stood empty until Prospero Bresciani's Moses was placed there in 1588 and it immediately came under the most severe criticism. The fourteen foot high sculpture - one of the largest pieces of the period - is visibly out of proportion. The head is too small for rest of the body, the torso too small for the legs and the whole thing appears squat and almost pear shaped. Even the positions of the arms - the ambiguously extended right arm once held a rod - appear awkward. It is hard to believe that only several decades before Michelangelo had created his great Moses. 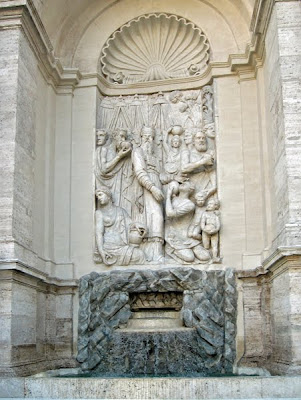 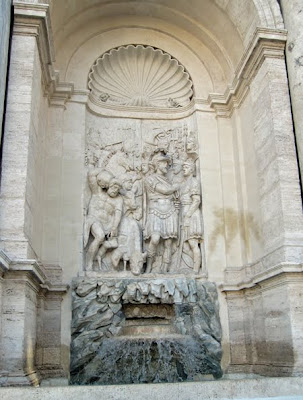 A left click on the image will enlarge the sculptures in the niches - my own guess is that the right is Aaron and the Jews collecting the water from the spring and the right is the preparation for battle after men and animals have been refreshed.
The left panel I have seen referred to as Aaron and the Children of Israel gathering manna or Aaron and the Children of Israel gathering water - in any case Aaron is definitely there and they are definitely gathering something. The right panel shows either Joshua selecting warriors for the battle of Rephidim against the Amalekites or Joshua Leading His Army Across the Jordan. Again Joshua - or at least a General - is there as are soldiers and they are preparing for something. Make you choice! 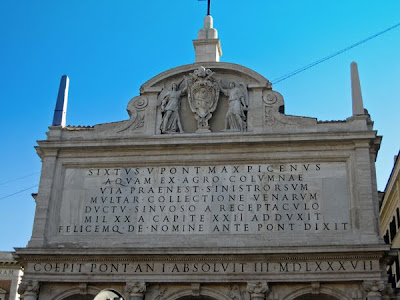 The inscription makes sure that all and sundry know who commanded that the aqueduct be built, the origins of the water ( the springs at Pantano Borghese) and the length of the aqueduct (24 km or 15 miles). The later part of the inscription (FELICEMQ.ue DE NOMINE ANTE PONT.ificatus DIXIT) explains that the Ponfiff called it Felice (Happy) because it was quenching the thirst of the populace.
The Mostra came in for criticism shortly after its completion. Even at a time when facades had the appearance of stage sets it has a flattened aspect and lacks a certain gravitas. The attic is disproportionate to its base but that was necessary if the inscription Sextus commanded was to be visible to all. And perhaps some of that criticism reflected more the feeling of the time towards a less than popular Pope - he had restored law and order and financial solvency to the Papal States with a heavy hand - as well as unfair comparisons to other Mostre in Roma and elsewhere. 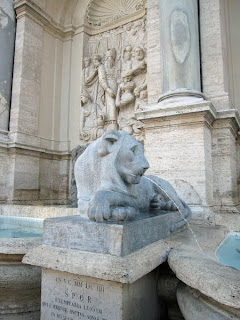 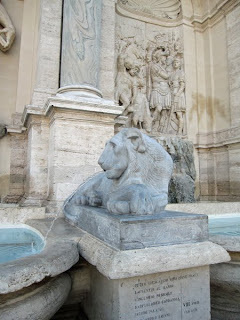 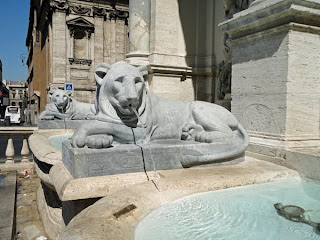 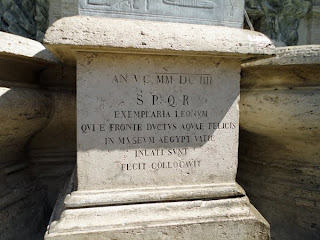 These rather endearing, if slightly effete, lions spit water into the basins that were meant for public use. A notice (in Latin??) tells us that these are copies of statues that can now be seen in the Egyptian Museum in the Vatican.
But as well as its ceremonial duties the Mostra served the Rione as an important source of water. The populace collected their water from the four large basins fed by the replicas of Egyptian lions while outside the marble balustrade - which acted as an barrier - there was a separate basin for animals. Two large marble basins were set aside for laundry and a private wash house was built beside the fountain for the use of the local women. 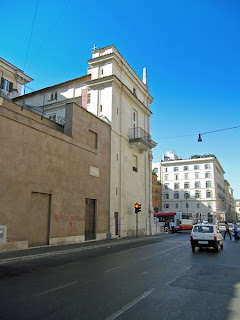 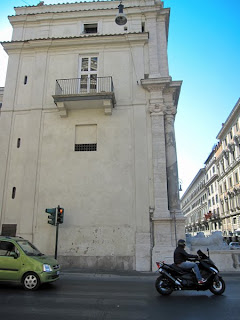 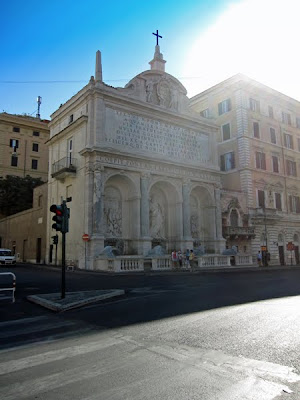 As I mentioned in my first posting the approach from my neighbourhood gives little indication of what lies just around the corner. The photos above show the back of the Mostra - a boutique B&B called The Moses Fountain Apartments and a section of the St Regis Hotel - coming up Via XX Settembre. Even at the corner in front of Santa Maria della Vittoria there is little hint of what is to come. It isn't until that corner is turned that all is revealed. 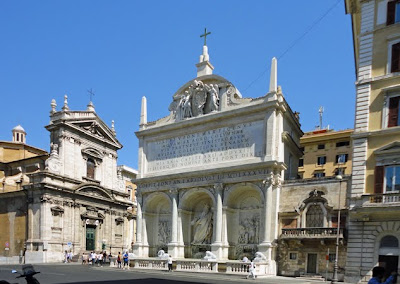 But then it was never meant to be viewed from that approach - which was after all only a country road leading to Porta Pia - but rather from the Piazza San Bernardo. Though today's view is obstructed by poles, signs and traffic with Santa Maria della Vittoria in as a balance it is still - all quibbles about proportion and artistic validity aside - an impressive sight.

What a difference cleaning and restoration makes! And love those effete lions!

You went into a lot of effort to research, photograph, and write up this little gem of history. Thank you for sharing your learning with us.