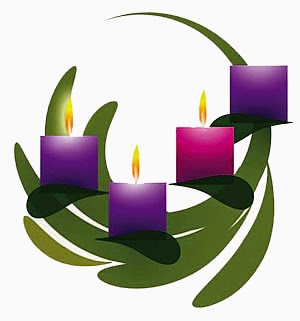 Say to them that are of a fearful heart:  Be strong, fear not: behold your God will come and save you.

There are so many wonderful songs for Advent and Christmastide that take us beyond what for most of us are our traditional carols.  I was fortunate growing up to be introduced to many Polish carols as well as traditions by the Michalskis who lived next door to my family and were my best friends.  This may well have been the door that opened up a world for me which went beyond my Anglo-Saxon roots.

Through the years I've been introduced to Christmastide music and customs that are as varied and wonderful as the place where I experienced them.   And it seems in the last twenty years that Christmas music has expanded beyond the traditional to include carols from all eras and many cultures.

The traditions and music of the Basque region are generally unknown to the world at large but one regional carol has become a favourite over the past few years.   Birjina gaztetto bat zegoen recounts the story of the Annunciation by the angel Gabriel to Mary of her role as chosen vessel for the birth of Christ.  The original melody was dance-like as performed here by Aquabella.

In 1897 on a commission from the French Government the French musicologist, teacher and composer Charles Bordes collected and published Les Archives de la tradition basque.  It came to the attention of Sabine Baring-Gould one of the most fascinating men in Victorian-Edwardian England.  Baring-Gould was an Anglican priest, hagiographer, antiquarian, novelist and eclectic scholar.  He wrote over 1240 publications - ghost stories, novels, biographies, hymns (Onward Christian Soldiers is only one of his many), collections of folk stories and, what he considered his greatest achievement, collections of folks songs.  He made alterations in some of the lyrics which he considered too risqué for the time but left his notes behind for those who in the future might wish to study the original texts.  He translate much of Bordes' collection, the most widely known being Birjina gaztetto bat zegoe.

It does not appear that the carol achieved any great popularity in the early 1900s but over the past few decades has become a choral staple at Christmastide.  There have been many settings though few have preserved it's dancing metre.   Of the many videos available I found this simple version by the Crimson Ensemble the most folk like.


The Wikipedia entry on Baring-Gould makes for a fascinating read - the man was a true polymath, a ture genius and a fascinating character besides.   And he opened the door that gave us this beautiful Advent carol.

My blog buddy Debra and I had the same thought and she has posted a lovely version of this carol on She Who Seeks.

December 14 - 1896: The Glasgow Underground Railway is opened by the Glasgow District Subway Company.

Great minds think alike, Willym! My scheduled post for this Tuesday is on this same carol! If you don't mind, I'm going to add on a link to your post too so people can come and read yours as well, if they're so inclined.

I learn so much music from you.

Thank you for the Basque rendition! What a suprise!

Visiting you from Debra's blog. Such a beautiful song you've shared. I think I'll have a cup of coffee, sit back and listen for awhile. Have a very Merry Christmas!