Wikipedia defines a taphophile as a "Tombstone Tourist": one who has an excessive interest in graves and cemeteries.  I'm not sure if I am really into taphophilia but I admit to a fondness for visiting cemeteries and looking at graves.  Often they are a revealing snapshot of points in time in the history of a place and its people.  The stories of peoples lives, their loves, thier achievements  and their family are traced on elaborate stone and marble vaults, on elaborate iron-work,  simple wooden crosses or enamel plaques. 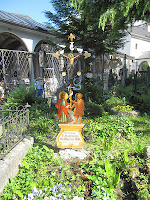 Take as an example Petersfriedhof or St Peter's Cemetery in Salzburg.  You may recognize it from The Sound of Music.  It was the place where the Von Trapps cowered in the darkness after they had made their cute "Farewell Symphony" exit from the Felsenritsheule which is just a few metres away.  Well dark and threatening it may be during the nighttime but in the daylight it is one of the most peaceful, beautiful and visited places in Salzburg.  On every visit since that first trip back in 1969  I've taken time to stroll along its paths and admire those particularly Tirolian iron-worked markers (a right click will enbiggen the two lovely examples) that serve as memento mori of so many of the local worthies who have passed this way. 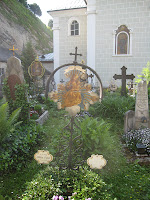 The burial ground rests at the foot of the Festungsberg in the shadow of Hohensalzburg.  Though the first recorded burial is not until the 1100s there are some indications that the area served as a cemetery when St Rubert of Salzburg founded the Abbey of St Peter in the 700s  Forming part of the cemetery are catacombs carved into the rock that date from somewhere between 400 and 800 CE thought to be the hiding place of Christians during the Barbarian Invasions.

The cemetery lay dormant and unattended between 1878 and 1930 when it was reopened and restored.  Prior to its closing it served as the final resting place for Michael Haydn and Mozart's sister Nannerl as well as many prominent citizens of the town.  Though many of the more wealth were interred in elaborate vaults in the baroque colonnades along two sides of the cemetery many Salzburgers rest in loving tended plots marked by curlicues of wrought-iron with enamel plaques afixed telling us who and when they were.  Many are adorned with paintings of favourite saints, the Blessed Virgin or the Trinity itself; some worked like fine miniatures, others with more primitive presentations.  But all record the passage of a soul to a place of rest in the shadow of the mountain.


Monday May 20: Final Day of the Festival - Part I

I very foolish booked tickets for all three concerts programmed for today - 11:00  15:00  and 18:00 with little time between each one for food or refreshment.  Not the wisest move on my part, particularly as all three programmes were, in nature, a bit on the heavy side.  Continuing the theme of Sacrifice we had a day of Political Sacrifice, Religious Sacrifice and then Opfer in the sense of Offering - an offering of reconciliation.

Perhaps this was the most interesting programming of the festival - two works that spoke to the sacrifices made because of a repressive political situation by four Russian artists. Two of the artists stayed and endured the fallout that their works made them subject to; the third made compromises with the state; the fourth choose to leave his homeland to find artistic freedom elsewhere.  Each artist responded to the same political oppression in their own way.

Prior to his departure from the Soviet Union in 1980 violinist Gidon Kremer had mentioned to composer Sofia Gubaidulina the possibility of her writing a violin concerto for him.  Gubaidulina took that suggestion and using the strengths she heard and saw in his playing crafted Offertorium, a work for and dedicated to him.  There were many obstacles standing in the way of the work being performed by Kremer:  his decision to stay in the West had resulted in tensions with Moscow and the religious nature of Gubaidulina's works always meant that she was under criticism from and observation by the State for the inspiration she took from her faith.  Finally the piece was smuggled out of the Soviet Union to Kremer and he premiered it during Wiener Festwochen 1981with the ORF Symphony conducted by Leif Segerstam.  It was well received at its premier and subsequently Gubaidulina revised it in 1982 and 1986.  The last revised version - which we heard - have given both the composer and her works international prominence.

I felt very lucky when opening the programme to see that the performance notes for both the Offertorium and the Shostakovitch Thirteenth Symphony - Babi Jar were by my dear  David from I'll Think of Something Later.  As I have often remarked here David has been my guide in so many things since we became friends I was happy he was there to help me with the Gubaidulina.  First she is not a composer I am familiar with and second I don't always find "modern" composers are my cup of tea.  Though I am still unsure of where I stand on her work it was more than helpful to have David along, though I kept thinking it would be more fun if he were there in person.


Though I may be ambivalent on the work itself there can be nothing but admiration for any violinist performing it.   Aside from the fact that it was written with a specific talent in mind - not in itself unusual  - it demands a level of virtuosity that is daunting for anyone approaching the work.  Vadim Repin met the challenge though ultimately it seemed to be more a display of that virtuosity than as the act of devotion I have a feeling the work calls for.  And again for Gergiev and his orchestra there can only be admiration as they wound there way through a score that is complex and so multi-layered.   For myself I think perhaps listening to one of those initial performances by Kremer may reveal more of the beauty in the piece than did this performance.

If I had trouble with Offertorium there was none with Shostakovitch's Babi Yar.  My love affair with Dmitri Shostakovitch began when the Ottawa ChamberFest scheduled a cycle of his complete string quartets with the Borodin Quartet several years ago.  Though I only heard one or two concerts I began to explore his music a bit further.  In Rome there were frequent opportunities to hear his Symphonies and his The Nose played in several theatres in Italy in the classic Moscow Chamber Musical Theatre production.  A performance by the Hagan Quartet of his String Quartet Number 8 at Salzburg's MozartWoche sealed the deal.

Again in his detailed notes David outlined the history of the Symphony.  How Shostakovitch read  Babiyy Yar Yevgeny Yevtushenko's commemoration and condemnation of the massacre and Russian antisemitism.   He asked the poet's permission to set it to music.  How amazed by the composer's setting the young poet gave him a collection of his poems and wrote one for him - Fears, a sardonic indictment of the Stalinist years... and after.  How the composer had encountered difficulties with the authorities and performers right up to the day of the premiere in December of 1962.  How in 1963 in response to "advise" Yevtushenko had expand his text of Babiyy Yar beyond the slaughter of Russian Jews to "embrace the sufferings of the Russian People", a compromise which shocked and grieved  Shostakovitch.  How the work work remained unplayed for five years on "official recommendation".


A "choral" symphony with bass soloist Shostakovitch set five of Yevtushenko's poems including "Fears" and the eponymous "Babiyy Yar".  Apparently the poet found Shostakovitch's choice of poems puzzling and could see no common theme but reading the poems (translations provided in the programme) it is easy to see what attracted the composer:  Babiyy Jar - the sufferings of Jews, not just in Russia; Humour - the role of humour in a repressed society; In the Store - the strength of women in times of trouble; Fears - the backward slap at being constantly watched; and Careers - sacrificing principles to the safety of a career.  Five facets of living in a totalitarian society.  (The full texts that Shostakovitch used are available here - this includes the original text of Babi Yar.

The orchestra and male chorus of the Mariinsky were in top form and Valery Gergiev brought out both the power and far subtler sardonic qualities in the music.   Bass Mikhail Petrenko seemed somewhat nervous - almost uncertain - in the first solo of Babi Yar but by the second - the memories of a young boy being kicked and beaten, the victim of a pogrom -  had reached his stride and brought an intense range of emotions to the remaining four movements.

I was particularly overwhelmed by the third movement:  In the Store.  It moves me more than the other movements as it paints a picture of the women of Russia lining up for whatever is in the store that day.  The text is bitter, admiring, sorrowful, loving, and angry and in his music Shostakovitch catches every nuance of Yevtushenko's words and expands them into an almost universal tragedy. Gergiev, Petrenko, the chorus and orchestra captured those moods eloquently.

It was an emotional high point of the Festival - on a par with the opening night Norma - as we were leaving the Felsenreitschule they were opening the roof to allow the air and sunlight in and it was like a release of emotion.   The intensity of the experience meant that the remaining two performances were somewhat overshadowed.

I'd love to hear that Shostakovich work. I used to have quite a thing for Yevtushenko's poetry when I was young.

Thanks for all this; I'm sure there's plenty more to come from Salzburg, as it were, just as I can't stop writing about Palermo.

We have met up with another new blog friend, wanderer (John) and his partner Kim from Sydney. I had the mad idea we should all gather in Dresden where Freund Peter Rose was singing Ochs to the hypergorgeous Anne Schwanewilms's Marschallin, with Garanca, no less, as Octavian, Thielemann conducting. The highs all hit where they should. We also went on different nights to a far less top-notch War Requiem from Rattle and the Berlin Phil back in that city. Otherwise, a wonderful, wonderful time in the most gorgeous weather. The floods had subsided, the tourists were few and the Dresdeners were all out with beers on the Elbe banks of an evening. Wish you'd been there too.